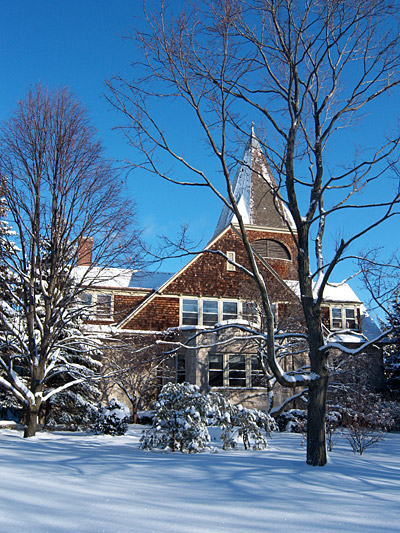 Lake Forest, IL – November 2008… As part of a 3-phase facility upgrade of the church’s audio system, First Presbyterian Church of Lake Forest recently completed the installation of a new wireless microphone system. Placed into service to coincide with the church’s 150th anniversary, the new equipment was installed by Sound Vision, Inc. of Elgin, IL and is comprised of components from the Lectrosonics catalog.

Currently guided by the Reverend Christine Chakoian, First Presbyterian Church of Lake Forest was originally built in 1862. While it has undergone growth and change as the requirements and size of the congregation has evolved, it remains a beautiful, stately architectural structure with a steep, sloped ceiling. Worship services are, for the most part, traditional in nature, with special emphasis on music at select holidays. The sanctuary itself is approximately 90 feet long by 60 feet wide and average congregation size is approximately 450 people. Seating is fixed—in the form of traditional pews.

According to John Miles, Systems Sales Manager at Sound Vision, a design/build firm that specializes in AV systems for the commercial and church markets, members of the church assumed a very proactive role in the selection of the new wireless system. “The church has a group of members who are very savvy about audiovisual equipment,” states Miles. “While the system was formally designed by the Chicago office of Shen Milsom Wilke, members of the church actually selected Lectrosonics. After evaluating a number of wireless systems, they chose the Lectrosonics products based upon its sound quality, build quality, and the company’s well-deserved reputation for reliability.”

“The installation of the Lectrosonics equipment represents the first of a planned 3-part renovation to the church’s sound system,” said Miles. “The Lectrosonics gear replaces an antiquated wireless system as well as some wired microphones that were previously deployed. Now, the pastors, guest speakers, and others are all equipped with wireless mics. The sound quality has improved dramatically and nobody is restrained by the length of a microphone cable. Most services use 3-4 wireless channels, so with their current system, they have adequate backup as well as the ability to mic several additional people for special services.”

During the installation, the Sound Vision crew ran a sweep of the area to check for RF (radio frequency) congestion and discovered the area was quite busy. Miles noted Lectrosonics’ intuitive operation for addressing this common issue. “As part of the setup process, we checked for RF signals in the area and discovered that the area was quite congested—including another church just down the road that also had wireless equipment. In an RF rich area, the Lectrosonics equipment is really a pleasure to work with as the system makes it quite easy to identify available frequencies and lock them in. In no time at all, we had the equipment set up and operational.”

With their new wireless microphone equipment in service, Miles reports that everyone at First Presbyterian Church of Lake Forest is pleased with the new equipment. “Everyone at the church has been very complimentary about the new system,” says Miles. “The new Lectrosonics system has made a significant improvement in sound quality and people are finding the equipment easy to work with. With their new wireless mics, people are able to hear more clearly and the system has been performing flawlessly. Now that’s the kind of feedback we like to hear.”

For additional information about First Presbyterian Church of Lake Forest, visit them online at www.firstchurchlf.org.