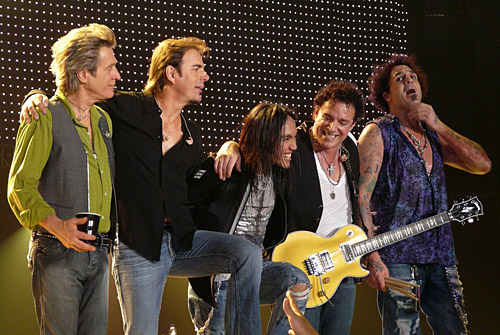 Los Angeles, CA… With a series of highly recognizable power ballads and songs such as “Don't Stop Believin”, “Any Way You Want It”, “Faithfully”, and “Wheel in the Sky”, Journey is one of the all-time great American rock bands. Though the band has seen its roster change over the 35 years of its existence, lead and rhythm guitarist/ vocalist Neal Schon is, without question, one of the more enduring members. To the delight of fans everywhere, Journey continues to tour extensively. This year alone, the band travelled throughout South America, Europe, and North America, and through it all, Schon performed with a wireless setup from Lectrosonics.

Adam Day, who since 1981 has served as guitar technician to a number of leading guitarists including Ted Nugent, Dokken, and, for more than 20 years, Slash, is now holding the fort with Neal Schon of Journey. Prior to Day’s arrival in February 2008, Schon preferred the tried and true “cabled” approach to performing—not because he enjoyed being tied to his equipment, but rather because he hadn’t found a wireless system with the sound quality and responsiveness he considered essential.

“When I started with Neal,” notes Day, “I suggested he give the Lectrosonics equipment a try. I explained that I had used the gear successfully with Slash for more than two years without experiencing any performance issues at all. Neal took the system home, played with it for a while, and came back with a thumbs up. Since that time, we’ve been using the Lectrosonics MI33A active guitar cable, IM Digital Hybird Wireless beltpack transmitters, and the R400a rack receivers. We have two systems with Neal’s A touring rig and another two with his B rig.”

In addition to Schon’s electric guitars, Day also uses the Lectrosonics setup with an acoustic guitar. “Occasionally, I use this same system with Neal’s acoustic,” said Day, “including the active cable, which I simply pad at the input. Neal is extremely pleased with the sound quality of the Lectrosonics equipment—it’s clear and extremely articulate. Previously, he experimented with other wireless systems, but the compandors in those setups always compromised the sound quality. Since Lectrosonics’ Digital Hybrid Wireless™ technology doesn’t use a compandor, this is no longer an issue.”

In addition to sound quality” Day continued, “the Lectrosonics equipment is extremely responsive. There’s none of the latency that bothered Neal with previous wireless setups. The sound quality and responsiveness were the two main issues that previously kept Neal from performing with wireless equipment. Using Lectrosonics, the sound is pure and clean, attack transients sound exactly as they should, and the transition from a cabled system to the wireless rig was essentially seamless.” 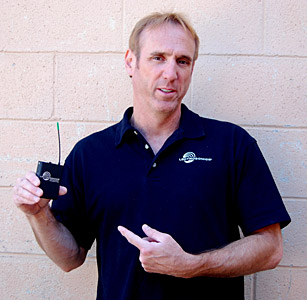 Day was equally enthusiastic about Lectrosonics’ reliability. “In all the time I’ve used Lectrosonics gear with Slash and, now Neal, I haven’t experienced a single RF issue,” said Day. “This includes literally hundreds of shows in clubs, arenas, stadiums, and outdoor venues. No dropouts, no hiss—nothing of that sort.”

When asked about range and frequency selection, Day was equally positive, “Range has never been an issue with Neal. During my time with Slash, he would wander all over the place and really tested the system in that capacity. Not once did I ever experience a single dropout. I knew Neal wasn’t quite as active as Slash in that regard, so I was never concerned about it. I’ve also had a really positive experience with the Lectrosonics gear in congested RF areas. The first thing I do when I get to a new location and fire up the equipment is look at the available frequencies. I do this right on the gear. If the current setting doesn’t look clear, I’ll use the Smart Scan in the receiver menu, and the system takes everything around me into consideration. It finds the cleanest frequency—flawlessly—and I use this feature at every new location. It works beautifully.”

Day also commented on Lectrosonics’ reliability and technical support. “Lectrosonics has some of the best made equipment I’ve ever encountered,” said Day. “It’s easy to understand and setup, and on the few occasions I’ve required tech support, the company has been great to deal with. You’d be hard pressed to find a more supportive company than Lectrosonics. If you want a pure, clear sound, user-friendly menus, and good support, then Lectrosonics is the equipment you should choose. This is a company that won’t let you down.”