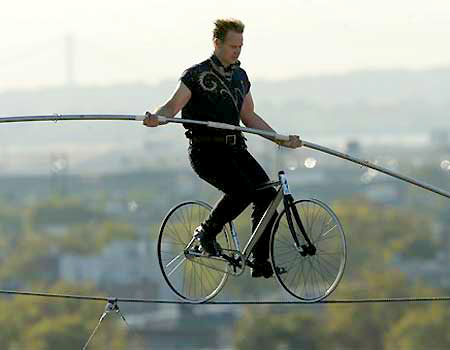 Newark, NJ – October 2008… The TODAY Show aired a live broadcast from The Prudential Center in Downtown Newark, New Jersey, where Ringling Brothers Barnum & Baileys' "High Wire Daredevil" Nik Wallenda of the "Flying Wallendas" set the Guinness Book of World Records for the longest & highest bicycle ride' across the high wire. A two-way communication system between Wallenda’s crew, the news team, and Wallenda himself was accomplished with Lectrosonics wireless equipment.

Nik Wallenda walked and rode a bicycle on the high-wire thirteen stories above street level at a distance of 235 feet with no safety net. The aerial display required constant communications between Nik Wallenda up on the high-wire and his father Terry Wallenda who served as Nik’s safety director and ground crew chief. The entire event was carried live on NBCs' TODAY Show, which also necessitated the need for a continuous communications link between Nik Wallenda and the TODAY Show’s Studio-1A in New York City and anchors Matt Lauer and Meredith Vieira, who conducted a live interview during Wallenda’s aerial performance.

The wireless communications system used by Nik Wallenda was provided by Kevin Parrish, Senior RF Engineer, NBC News Field Operations., and consisted of a Lectrosonics SM Series wireless belt-pack microphone and an R1a fold-back (IFB) receiver with a duplicate setup for his father Terry. According to Parrish, “I took the signal from Nik’s SMQa from my Venue rack-mounted receivers and sent the audio back to Studio-1A as well as into an IFBT4 transmitter on a different frequency, which provided Nik’s father, Terry Wallenda, with a copy of Nik’s "hot mic" so dad could hear every word spoken up on the high-wire.” In order to reduce any safety issues, Parrish supplied Nik with an "open ear" audio earphone so that he would not have any problems with equilibrium or balance while up on the high-wire by having his ear canal being plugged with the IFB receiver.

Terry Wallenda also had the same setup and wore an SMQa wireless microphone and R1a IFB receiver. Parrish explains, “I had Terry’s transmitter in IFB mode to talk directly to the R1a receiver on Nik while he was up on the high-wire.” Parrish also setup a "local mix-minus" where at the appropriate time, he was able to mix the IFB signal from the TODAY Show’s Studio-1A and send it to Nik Wallenda live. Nik’s wireless microphone was also sent to NBC’s helicopter "Chopper 4", enabling them to anticipate any moves or directions that assisted with the enhancement of aerial photography.

According to Parrish, “As usual, the Lectrosonics equipment came through with ‘flying colors’ and provided ‘The Flying Wallendas’ with flawless audio as they broke another high-wire world record! Nik Wallenda also spoke highly of the full duplex communications setup. For me, personally, it was one hell of a job. There's no Hollywood re-takes at a scene like this and I know that I could count on Lectrosonics as my partner in this wonderful world of wireless. As Wallenda attempts his next world record breaking attempt to cross The Grand Canyon early next spring, Lectrosonics will once again play a vital role as my partner by providing outstanding wireless equipment to NBC News."

Parish wished to thank his associate, “I would also like to express my thanks to Ricardo Gomez, NBC News Audio Engineer, who also assisted me in this unique team effort.”