Lectrosonics On Location With 'Marley & Me' 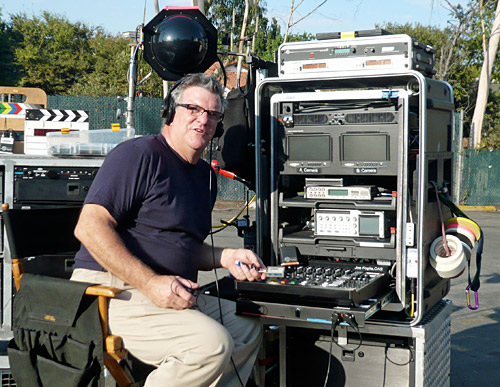 Hollywood, CA – October 2008… In the high pressure world of location sound, there is little room for ‘Oops, I missed that.’ The ability to capture the take when it matters most is paramount to ever being called back for another project. For production sound mixer Joe Foglia, this type of challenge is an almost daily occurrence. From his days with NBC’s Miami Vice to his Emmy award winning work on the NBC sitcom Scrubs to his latest project, the upcoming Fox 2000 Pictures film Marley & Me, Foglia relies extensively on the tried and true performance of his Lectrosonics wireless equipment.

As owner of Southeast Audio Services, a firm that specializes in production and location sound as well as some ADR sound services, Foglia has been a long time fan of Lectrosonics wireless technology. “I was introduced to Lectrosonics years ago during the company’s formation,” says Foglia, “and I’ve been using it ever since.”

Most recently, Foglia handled location sound for the upcoming film Marley & Me, starring Jennifer Aniston and Owen Wilson. The comedy, which is directed by David Frankel, is about the important life lessons a family learns from their adorable, but naughty and neurotic dog. Based on the memoir by John Grogan, Marley & Me was shot on location in Miami and Ft. Lauderdale, FL as well as Philadelphia, PA. It is scheduled for release during the 2008 Holiday Season.

“While I was usually running 2-3 channels at any given time during this shoot” said Foglia, “I was prepared for anything upwards of twelve channels. I used several transmitters on this project depending upon the nature of the task before me. Owen Wilson wore a UM450 almost exclusively throughout this project. The transmitter was strapped to his ankle, with the microphone wire running down his leg on the inside of his trousers.”

Foglia had initially planned to wire actress Jennifer Anniston with a UM450 as well, but much to his surprise, she had other plans in mind. “I was all set to wire her up with a UM450,” notes Foglia, “but Ms. Anniston preferred the SMa Super Miniature transmitter. Apparently, she was introduced to that model on a previous project and became very fond of its diminutive size. The SMa actually worked out very well for her, since we ended up attaching the transmitter to the back of her bra. I also used the Lectrosonics RM remote with her transmitter, as she was very concerned about maintaining her privacy. This way, I could easily silence her mic every time she finished on the set so that nobody would be able to pick up her conversations with a scanner.”

In addition to their small form factor and the longevity of the transmitters’ battery operation, Foglia also commented on the ease of using the Lectrosonics equipment in an RF rich environment. “A set is typically a very crowded space in terms of wireless equipment” explained Foglia, “so being able to identify and lock in open frequencies is very important, and this is an area where the Lectrosonics gear really excels. I love the fact that I can connect my computer to my Venue rack and, using the IAS (Intermodulation Analysis Software from Lectrosonics’ partner Professional Wireless Systems) software, identify an open frequency. This provides a great visual aid, whereby you can actually see how crowded a frequency range is. Identifying open frequencies with the system is extremely easy. I frequently enter the postal Zip code for the area where I’ll be working and set the equipment before I ever get to the shoot.”

“In addition to their solid performance,” continued Foglia, “Lectrosonics technical support services really understand the nature of a location sound engineer’s work. Their support is always prompt, the technicians understand what you’re trying to accomplish and, on those rare occasions when the equipment requires service, the company turns the gear around very quickly. You can’t ask for more than that.”

For additional information about Southeast Audio Services, contact the company at www.southeastaudio.com; email This email address is being protected from spambots. You need JavaScript enabled to view it.; phone 800-562-8346.