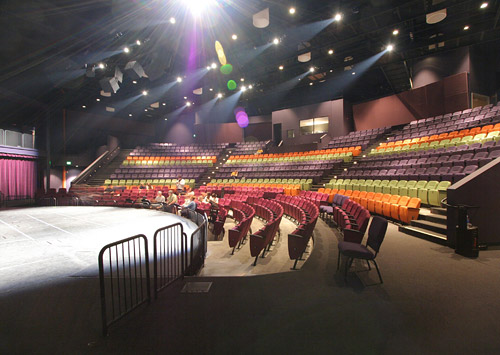 Fort Lauderdale, FL – August 2008… An integral part of Calvary Chapel Ft. Lauderdale, Calvary Christian Academy serves approximately 1,300 students ranging from pre-kindergarten through the twelfth grade. The recently completed Christian Discipleship Building is a stunning 168,182-square-foot complex that serves as a secondary school by day, provides adult continued education in the evenings, while also functioning as a children’s ministry space. World-class in every sense of the word, the facility is home to a beautiful 700-seat theater that accommodates a wide variety of activities spanning everything from musical performances and plays through seminars and other special functions. As one would expect in a facility of this nature, there is a state-of-the-art sound system—one that encompasses a 24 channel wireless setup from Lectrosonics.

North Miami, FL-based Harris Audio Systems, a professional audio dealer with its own design/build division, was contracted to install the audio system in Calvary Christian Academy’s theater. According to Mike Harris, owner of Harris Audio Systems, “The sound system that was originally specified for the theater called for twenty-four 2-channel receiver modules, which would then have required two antenna distribution systems and four paddle antennas. All of this was to occupy 14 rack spaces. Aside from taking up a lot of space, I felt as though the system lacked a number of features—especially considering its price. I was convinced there was a better solution.”

“Compared to the original design,” said Harris, “we were able to condense the wireless system down to four rack spaces using Lectrosonics equipment. Rack space is expensive, so this was a substantial savings in and of itself. While we initially envisioned five rack spaces, the recent introduction of the Lectrosonics Wideband system brought this down to four, as the antenna distribution system was no longer necessary. The system we installed was considerably less expensive and it incorporated computer-based setup and configuration via Lectrosonics’ excellent LecNet2™ control application. This level of capability, alone, would have incurred additional charges had the original design been implemented.”

“As this system is installed in a school theater,” continued Harris, “I also believe Lectrosonics’ high level of reliability and the product’s robust build quality was much better suited to the type of abuse the equipment would typically encounter in this environment. By the time everything was completed, the Lectrosonics wireless setup delivered greater functionality, occupied less space, and did so at reduced cost.”

About the Lectrosonics Venue (VRM WB) Wideband
The Lectrosonics VRM WB Wideband Receiver employs the company’s Digital Hybrid Wireless™ technology and covers the entire UHF band from 537 to 768 MHz in a single unit. It is compatible with any Lectrosonics VRS standard module or VRT tracking filtered module in the standard UHF range. The unit offers a modular configuration that enables users to install any combination of Lectrosonics’ standard fixed bandwidth receiver modules as well as VRT tracking filtered modules for a total of six channels. The receiver supports three diversity modes: Phase switched, Ratio, and Frequency. The receiver incorporates built-in zero-gain antenna amplifiers that facilitate RF signal "loop through" to additional Venue Receiver systems, DSP emulation modes for compatibility with analog wireless systems in addition to the Digital Hybrid mode, as well as USB and RS-232 computer interfaces plus the company’s VRpanel software (part of LecNet2™) for ease of programming.