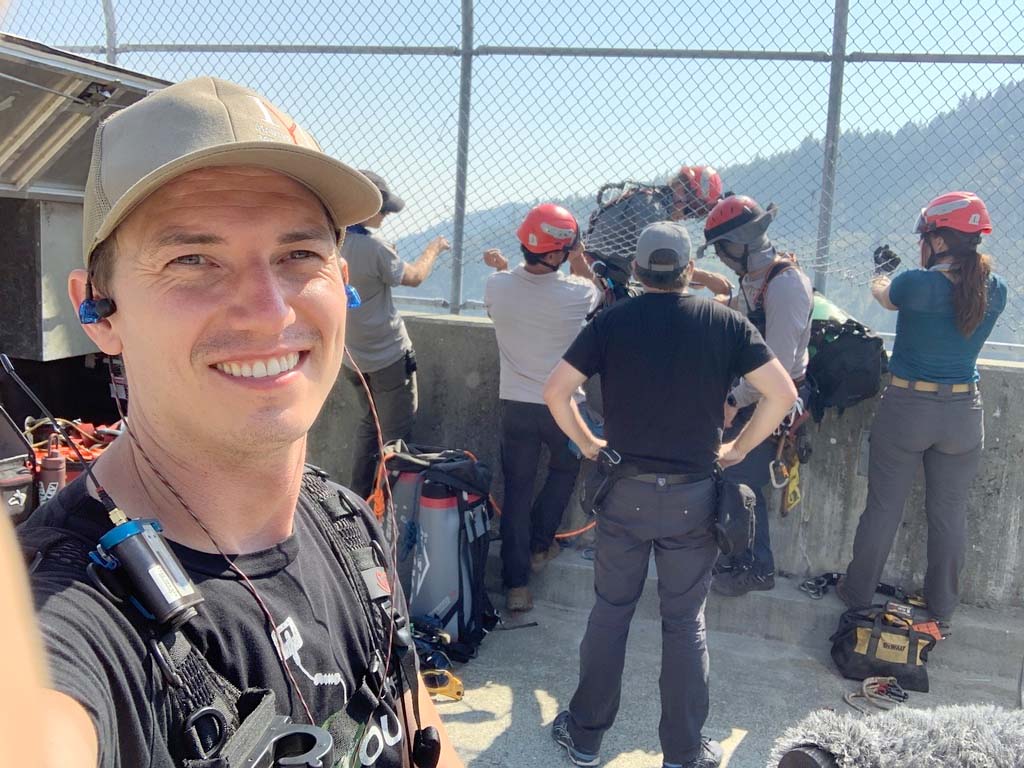 “Lectrosonics allows me to pack the most functionality into the smallest rig possible. Everything runs smoother and quicker. Camera people notice. Producers notice. There is nothing else I’d rather have.”

Sacramento, CA (November 10, 2021) — Donovan Murphy’s pedigree as a location production sound mixer in California’s capital city nets him many corporate and government interviews. Perhaps that’s why he also has a taste for the adventurous and even the hazardous. Whether news-gathering as the Kincade wildfire raced towards his position, following workers who service massive structures such as dams and wind turbines, or going inside Folsom Prison to document the 50th anniversary of Johnny Cash’s performance there, he finds Lectrosonics wireless to be as unflappable as he is. His main rig revolves around the all-digital D Squared family, including the DCR822 compact dual-channel receiver, DBSMD bodypack transmitters, and a DPR plug-on transmitter for his boom mic. This is augmented by time-proven Digital Hybrid Wireless gear: an SRc receiver paired with SMV and SMQV transmitters.

Murphy was impressed with the ratio of output power to usable range at a recent vertigo-inducing outdoor gig. “I recently worked on a documentary series about rope access -- crews who climb towers and bridges, that kind of thing,” he says, “I worked on the California portion in two locations. The first, Foresthill Bridge, is the fourth highest in the U.S. at 730 feet. I’m terrified of heights, but these guys just put on a safety harness and go strutting out onto those beams like it’s nothing. I’m certainly not going out there with them, so I thought range would be an issue.”

As things turned out, it was not. “I certainly wasn’t going to go out there with them carrying my audio bag, so I was glad I’d be able to send dweedle tones to the DBSMDs we had on them to put them in record mode,” explains Murphy, referring the DBSMD’s ability to double as a stand-alone microSD recorder. “I didn’t need to. At 50 milliwatts output power, I was getting great signal at the nice, safe sidelines!”

The second location, New Bullards Bar Dam on the Yuba River, presented a similar challenge. “The dam was interesting because it’s not symmetrical from left to right,” says Murphy. “We went all the way to the bottom to get these wide shots and drone shots of guys rappelling down the dam’s surface. Again, at 50 milliwatts we could hear them loud and clear from about 800 feet away, and that was just using whip antennas [on the DCR822 receiver]. With dipole antennas, we could roam as much as 2,000 feet away.”

Even though Murphy wasn’t personally suspended in midair, the thought of a subject’s beltpack taking a tumble caused no butterflies. “I’m very careful about securing my gear,” he notes. “But Lectrosonics has always been so tough that if one of those transmitters went bouncing down the dam, I’m pretty sure I could just pick it up and use it. The scratches would just add character!”

Indoor interviews present a more down-to-earth but no less real danger: Covid-19. Murphy has relied on his D Squared system’s exceptional range to record with maximum social distancing. “I did a recent project about the post-Covid reopening of the University of California at Davis,” he says. “A lot of the interviewees were scientists and experts who were testing the air, the groundwater, the sewage early in the pandemic. They were around this stuff in test tubes 24/7, so there’s a real possibility of exposure. I could leave DBSMDs with lavs, then put my boom on a C-stand with the DPR on the back and literally be in another room somewhere.”

Murphy notes that taking such precautions didn’t sacrifice sound quality: “Honestly, the D Squared stuff is indistinguishable from using cables. It sort of keeps catching me off guard, because I thought it was impossible to sound any better than the Digital Hybrid Wireless, which of course I still use and love. But damn, Lectrosonics went and did it!”

Neither did this hi-fi performance diminish at lower output settings. “I was doing an outdoor event right near the state house in Sacramento,” recalls Murphy. “I experimented with the 10-milliwatt setting on the DBSMDs, which was the lowest before the 2-milliwatt mode became available. I walked a couple of blocks down the street, skyscrapers between me and the stage and all that. The digital transmission worked so well that I didn’t need to go up to 25 milliwatts, let alone 50.”

Receivers in the D Squared lineup also apply precision filtering to squeeze narrower — and therefore more — useable channels out of a given bandwidth of the available spectrum, a benefit Murphy says is becoming increasingly relevant to his work. “Even in the middle of nowhere it’s getting more congested. Damn you, 5G,” he laughs. “If I go into somewhere like San Francisco, I really notice it. But with the wideband reception and surgical frequency scanning of the DCR822, I feel like I’m future-proof.”

As much as Murphy’s gear pleases him, he’s quick to point out a more important virtue: It helps him please his clients. “The D Squared stuff has permanently changed how I do interviews and other work,” he concludes. “Lectrosonics allows me to pack the most functionality into the smallest rig possible. Everything runs smoother and quicker. Camera people notice. Producers notice. There’s nothing else I’d rather have.”