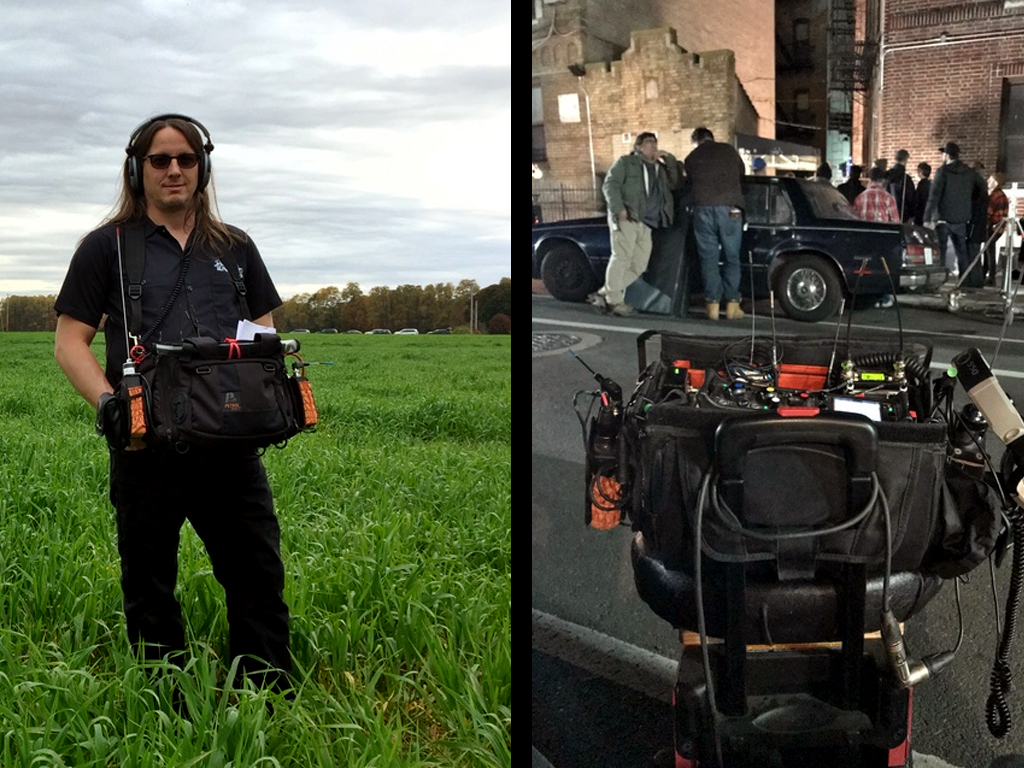 “After experiencing Lectrosonics for myself, I knew I would never go back to anything else.”

“I sort of fell into the Lectro world,” says Pouthier. “I came onto The Americans fresh off of Gossip Girl, under the tutelage of the great Allan Byer. He used Lectrosonics, as did Mike Lonsdale, a commercial mixer in New York whose gear I was borrowing and would eventually acquire. After experiencing Lectrosonics for myself, I knew I would never go back to anything else.”

Pouthier credits one particular day on location with this wireless epiphany. “We were doing a night shoot in Brooklyn,” recalls Pouthier. “We had finished the major dialogue scene and were about to film a stunt. It was late and I was starving. Down the block, I see a pizza place that’s open. I asked my boom operator how much time we had. He said, ‘I think you have time. Where are you going to leave the bag in case we start rolling?’ I said, ‘I’m taking it with me. I’ll turn around if you tell me to or if I hear any dropouts.’”

While Pouthier expected to return with time to spare, Murphy’s law would instead administer a test of Lectrosonics’ reputation for range and clarity. “Sure enough, I’m standing in line for pizza with my headphones on and they start getting ready for the shot right away,” Pouthier continues. “My boom guy asks where I am and I said, ‘Um, the pizza shop down the street.’ He says, ‘Okay, you sound solid, so I hope you’re receiving just fine,’ and I reply that I am. I hit the Record button on the Sound Devices 633 just as it’s my turn to order. The pizza guy sees all the gear and asks, ‘What the heck are you doing?’ I said, ‘I’m mixing a TV show, like, right now!’ The sound for the take got recorded with no problems whatsoever and I got my pizza. Plus, this was all just on the little whip antennas! I have the ALP650 and SNA600a on my main cart now, but again, this was just using the bag rig.”

Lectrosonics’ simplicity of setup was a key player in many in-car dialogue scenes. “In vehicles, the director was fond of French overs,” Pouthier explains. “Those are shots where you’re looking from the back seat at two people talking in the front, and there’s no typical profile or straight-on stuff. Most of the time, I just had to drop the bag in the car and hope for the best. The cars from the early ’80s had a lot less soundproofing, so planting a couple of Sanken CUB mics in the headliner through SM-series transmitters always got the perfect ambience. I had this one scene with three actors — Keri, Matt, and Margo Martindale — and the result sounded like you were sitting in the car with them.”

That degree of audio quality was always a standout for Pouthier. “On Gossip Girl, our boom mics were on cables,” he notes. “Talent usually had Sanken COS-11s on SM-series transmitters. I couldn’t tell the cabled and wireless signals apart, and would ask Allan how he was making the wireless sound so good. He showed me some tricks about gain staging and so on, but a lot of it had to do with the fidelity of the transmitters.”

Lectrosonics has also eased the task of frequency coordination on many productions Pouthier has worked — especially when things don’t go according to plan. “Two things come to mind in this department,” he recounts. “First, I once worked on a reality competition show about fashion, and as a sound mixer you’re assigned a camera and expected to have audio up for whoever is in the shot as soon as that camera is active. You have to flip frequencies a lot, and with the controls on most receivers, you’d be lucky to grab a soundbite before the scene is over. With Lectrosonics, I programed groups and switched with a quick button-push.”

Pouthier’s second secret weapon for frequency management is Lectrosonics Wireless Designer software. “When I’m working in L.A., I find the RF spectrum is just crazy busy,” he says. “You go to the frequency coordinator at the beginning of the day, but by the time you get going, some of what they’ve told you is available turns into junk. I have [a laptop with] Wireless Designer interfaced to my original Venue receivers — I have a wideband plus a narrowband — and I can always find frequencies that work in the moment and get a detailed spectrum analysis as a bonus.”

It wouldn’t be film and TV production without some indelicate handling of equipment, which is why Pouthier heaps his final praise on Lectrosonics’ well-known ruggedness. “Let me tell you about durability,” he grins. “My bag rig has fallen off rolling carts several times, and nothing in it has ever broken. I had an SM transmitter go for a skim and a skip across pavement when it fell off an actor riding a bicycle. I’ve had the same happen to IFBs when the boom guy chases after a walk-and-talk that turned into a run-and-talk. The units would get maybe a ding or two in the casing, but they’re all still working to this day.”

“I’m originally a drummer,” he wraps us, “and my drums, cymbals, and even sticks are all one brand. In the audio world, I’ve developed that same loyalty towards Lectrosonics.”