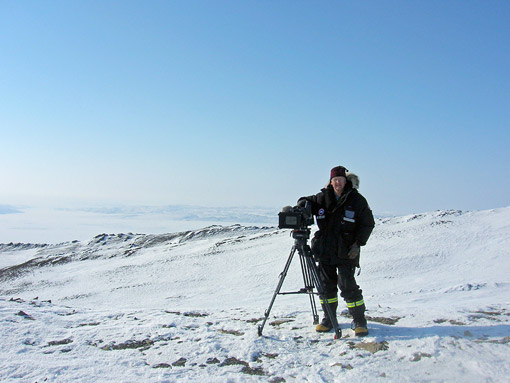 Ellesmere Island, Nunavut, Canada… Perhaps nowhere on Earth is global warming and the resulting climactic changes having a more profound effect than in the Arctic region. In an area that previously held very little benefit for most people, there is suddenly tremendous interest in the land—and who owns it—as a result of the natural resources that are present here. Now the race is on to determine who owns title to the area. In a region that was once ‘a given’ in terms of its territorial ownership by Canada, the Northwest Passage and the North Pole are now areas of dispute by the US, Russia, Denmark, and Canada. Recently, Joe Media Group, based in Calgary, Alberta, Canada, set out to document this race for territory and riches and the arsenal of production gear used for this project included wireless equipment from Lectrosonics.

Douglas Munro, c.s.c. and co-owner of Calgary, Alberta-based HDTV Productions was contracted by Joe Media Group to provide Director of Photography services for the project, known as The Battle for the Arctic by Arctic Passage Productions, Inc. The documentary, which is slated for broadcast via the CBC (Canadian Broadcasting Corporation), is expected to air during Winter 2009. “According to Munro, “This region is ripe for the exploration of oil, natural gas, and other resources and, to determine who owns what, there is a lot of mapping taking place throughout the area. Our mission was to tell this story in order to give viewers a perspective on what’s at stake here.”

“The outside temperatures hovered in the range of -35C,” continued Munro, “so our wireless equipment had to perform under some truly grueling conditions. I’ve always experienced great results with our Lectrosonics gear, so we used two UM450 Digital Hybrid Wireless beltpack transmitters with an SR dual-channel slot mount ENG receive . For the most part, the transmitters were placed inside the jackets of the on-camera interviewer and the subjects who were speaking. The receiver was normally mounted on the camera, which was inside a Portabrace Pola Cover with Heat Factory disposable heat packs.

Munro notes that on some of the more “balmy” days—where temperatures climbed to -20C—he elected to use a Portabrace shoulder cover on the camera, which left the SR receiver exposed to the cold. “We were operating under a really fast-paced schedule,” notes Munro, “and at times, it was simply inconvenient to use the Pola cover. As a matter of course, we also changed the transmitter batteries every two hours, but it was obvious that they could have lasted longer; we just wanted to be safe while operating in the cold weather.”

Munro was very pleased with the performance of his Lectrosonics equipment. “Operationally, the receiver's display was easy to read and use, and even in cold weather the display was active,” said Munro. “It’s not uncommon for LCD displays to freeze up under these conditions. The fact that the SR receiver’s display kept right on working is a big deal as it provides an extra level of confidence that the levels one is reading are accurate. Similarly, the transmitters had no problem with signal strength—even though they were often buried inside thick parkas. Throughout this project, sound quality was excellent and the gear performed as reliably as always.”

In addition to the stellar performance of the Lectrosonics wireless equipment, Munro was equally enthusiastic about the company’s customer and technical support services. “Lectrosonics continues to impress me,” says Munro. “Not only does the gear perform really well, the company is extremely proactive in the way its supports its customers. Lectrosonics recently issued an update for the SR receiver and, rather than waiting for word of this to trickle down via people who stumble upon the update on the company’s website, Lectrosonics actually called their dealers to notify them. In turn, my dealer (Matrix Video Communications in Calgary) called me. This sort of responsiveness is rare in this business and I really appreciate it.”

Before continuing with the next phase of The Battle for the Arctic that will take him to Moscow, Russia, Munro offered this closing thought. “My Lectrosonics equipment couldn’t have performed better,” said Munro. “The gear handled the cold weather without a problem, it’s lightweight (which was very convenient for documentary camera operation), and the range allowed for complete flexibility in the field. I’m a big fan of their products.”

For additional information about HDTV Productions, Incorporated, visit the company online at www.hdtvproductions.com.