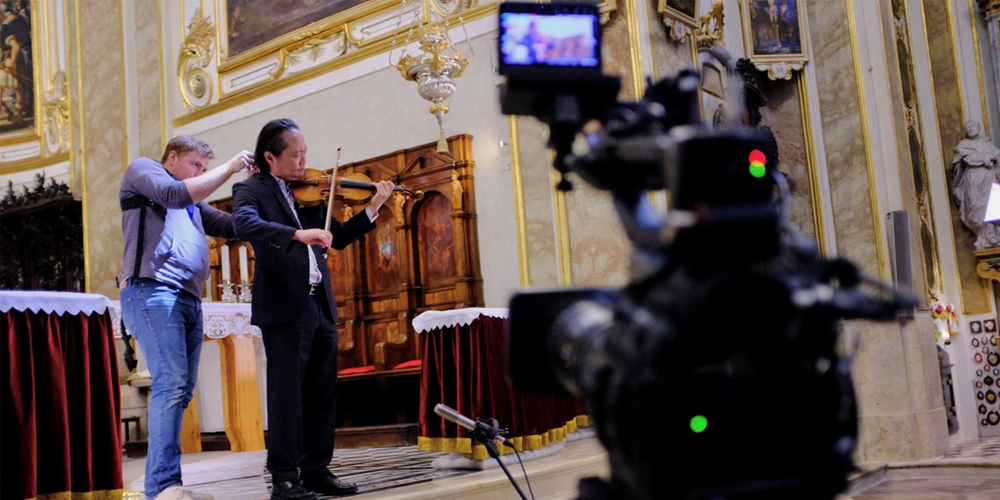 “I’ve seen producers immediately look relieved when they saw Lectrosonics in my bag. Even people that you’d think wouldn’t be concerned about audio gear know Lectrosonics is the gold standard.”

Austin, TX (September 8, 2020) — Hosted by virtuoso violinist and conductor Scott Yoo, the globe-trotting PBS Great Performances Series, Now Hear This could be an Anthony Bourdain travelogue, only with a focus on classical music instead of cuisine. Created by Harry Lynch of Austin-based Arcos Films, it compellingly explores classical composers’ works and life experiences in the places where they plied their craft. The intense travel schedule necessitates a tight crew, and Reid Mangan is tasked with recording both musical performances and dialogue. For the latter, he relies on Lectrosonics Digital Hybrid Wireless, specifically SRb and SRc receivers (slot-mounted in an SL-6 dock with a Sound Devices 688 recorder); two each of SMV, SMQV, and LT transmitters; and an HMa plug-on transmitter paired with a UCR411a receiver for occasional boom work.

“For the music performances, I’m running up to ten channels of cabled mics and am focusing on mic placement to get an ideal sound from each instrument. And I capture dialogue at the same time,” says Mangan. “Because this is a documentary show and not scripted, we don’t get to do alternate takes if there’s a technical problem. Point being, for the dialogue, I need wireless that I can set and forget. I can’t hold a boom over someone’s head at the same time I’m doing everything else; we need whatever is happening right in front of us to come through in the moment and sound natural, with no surprises. Lectrosonics is better in that regard than any other brand I’ve ever used.”

One surprise that Lectrosonics has helped Mangan mitigate is part and parcel of world travel: frequency planning difficulties. He is quick to point out that Lectrosonics’ Digital Hybrid Wireless technology, which maximizes usable channels within a given radio frequency range, has made the process smooth sailing no matter where the show finds itself. “We’ve filmed on three continents, including North America, Europe and Africa,” he notes. “Normally, every time you cross a border you have to put together an audio bag specifically for that country or region. That hasn’t been the case here. The receivers always lock onto open frequencies, and between Scott and his guests we’ll usually have up to four channels of wireless going, though sometimes I’ve used six.”

On the transmitter side of the equation, Mangan cites the high output power of the SMV and SMQV as a lifesaver. “We’re often shooting in buildings that are in busy city centers with tons of RF activity,” he explains. “We’ve used the 250-milliwatt mode on the SMV and SMQV more than I expected. We also like the SMV because it’s small and can be easily hidden on the talent. The LTs are relatively new to my rig, but I like the infrared sync on those and being able to quickly change frequencies without dialing it in manually. Anyway, the transmitters always punch through and we get a great sound — detail, dynamic range, the natural quality of the human speaking voice, all that — with no interference.” Thanks to Lectrosonics’ surgical selection of clear frequencies, the crew has likewise received no complaints about causing interference for anyone else.

Mangan finds Lectrosonics’ audio quality so pristine that he occasionally uses it to augment a wired instrument mic in addition to recording dialogue. “Sometimes I’ll gain-stage a lav mic to capture a cello or violin. A little of that added to a wired signal can add body in the mix. I might do this with larger ensembles as well because with the wired mic kit, we only have ten channels to record all the instruments.”

Mangan sees Lectrosonics’ ability to “get out of the way” as important to making the guests comfortable and thus capturing candid conversations. This in turn supports the mission of Now Hear This: “The show is about making classical music accessible and organic, about revealing it in terms of who it came from and where they came from. The director, Harry Lynch, really wanted to overcome the stereotype of the museum-like concert hall where a piece is played perfectly for an audience wearing tuxedos. Scott Yoo likes the ease of use of Lectrosonics because it lets him focus on that task.”

The filming conditions on Now Hear This have not presented major environmental woes so far, but Mangan has weathered them on other productions, his Lectrosonics gear never flinching.

“While shooting a documentary with an indigenous tribe in Columbia, we had hours when it was pouring, hours when it was blazing hot, all of that. The gear was getting rained on, sweaty, and dirty. At one point, someone we had miked rolled down this muddy hill and his Lectrosonics transmitter just got covered. And it kept on working, no problem.”

Mangan’s trust in Lectrosonics is built on a lifetime of use and, before that, aspiring to be a user.

“Outside of a major production town, wireless audio gear is not easy to find or rent,” he says. “It’s not like camera kits, which are pretty ubiquitous. So, you buy your own and when you’re starting out, you buy the cheaper stuff. I’ve used it all. But nearly everyone in my profession knows that as soon as you can afford it, Lectrosonics is what you get and that you’re going to have more and better gigs because of it. I think my first piece was a UM200, and once I upgraded, it was like night and day. And their current stuff is better still. On shoots I’ve walked onto as the ‘new guy,’ I’ve seen producers immediately look relieved when they saw Lectrosonics in my bag. Even people you’d think wouldn’t be concerned about audio gear know Lectrosonics is the gold standard.”

Now Hear This Season 2 will be returning to PBS starting on September 18th.

Learn more about Now Hear This, broadcast on PBS and streaming on Amazon, at www.nowhearthis.org.