Lectrosonics Wireless Used In Production Of US Navy's Air Support 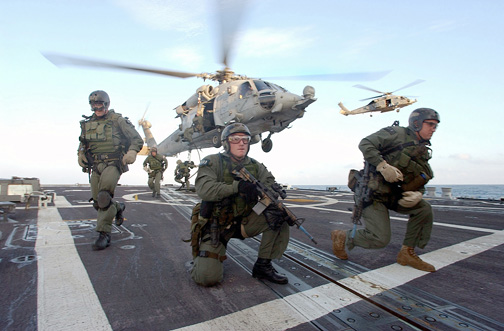 Los Angeles, CA—July 2008… When the mission calls for unconventional warfare, foreign internal defense, direct action, counter-terrorism, or special reconnaissance operations, the US Navy SEALs are frequently the first to get the call. Such is the premise of Air Support, a new presentation currently in production by the US Navy for use at Navy air shows as well as recruitment efforts and other promotional activities. Capturing the sounds of Navy SEALs emerging from the water, jets taking off from aircraft carriers, plus all the dialog that accompanies these activities requires some special production know-how—and the gentleman charged with making it all happen relied upon wireless technology from Lectrosonics to get the job done.

LA-based Farr Out Productions, which has provided film and TV production support since 1996, was contracted to provide location sound services for Air Support. According to Scott Jason Farr, sound mixer, DP (Director of Photography), and the owner of Farr Out Productions, “While the aircraft carrier to be depicted in the final product is the USS Nimitz, production actually took place aboard several different aircraft carriers off the Baja, California coast. In addition to working in a highly congested RF (radio frequency) environment aboard an aircraft carrier—with all its radar, radio, and other equipment—there was also seawater, JP4 jet fuel and exhaust, and countless other conditions that made this project very difficult.”

“Because of these conditions,” continued Farr, “I knew my Lectrosonics MM400c miniature transmitters—with their water resistant design—would be the best possible choice, so I used five of them along with five Lectrosonics UCR411a receivers. I’ve always found the UCR411A’s to be very capable at identifying open, available frequencies, so with all the electronics aboard the various ships in the battle group, including the aircraft carriers, AWACS (Airborne Warning and Control System), and submarines, I knew they were right for this job.”

Air Support begins with a group of SEALs emerging from the water (via a submarine) onto a beach, where they crawl through the sand to avoid detection. They make their way to an isolated spot, at which point they provide surveillance of a remote airstrip. After a plane lands, they witness contraband being off-loaded into a warehouse. Upon reporting this activity to the command post, the camera tracks the communication among various military personnel aboard the aircraft carrier, the loading of a bomb onto an F/A-18 Hornet fighter jet, the launch of the jet, and the eventual destruction of the warehouse—after which the Seals retreat.

“I don’t believe any other transmitter would have been able to handle that type of working environment,” notes Farr. “When we were on the aircraft carriers, there was a tremendous amount of ocean spray from the high seas and wind, as well as RF from the radar systems. Between the water and the RF conditions, the Lectrosonics gear handled this really well and enabled me to capture a wide variety of sounds. In addition to the Voice Technologies VT506 lavaliere mics I used with the transmitters, I also used custom cables that enabled me tap to into the Navy’s communications system. All of this was recorded to an Aaton Cantar-X2 field recorder.”

With such a challenging set of conditions for this and other projects Farr finds himself involved with, one can’t help but wonder, “Does the gear survive all this?” Farr’s response was an enthusiastic thumbs up. “Of all the equipment in the TV and film industry that I deal with, and all the rigmarole someone like myself has to endure on occasion to get the information I need, I believe Lectrosonics leads the way in terms of proactive customer and technical support. The company’s open door policy is refreshing. They take the initiative to inform me of product updates and, when I need service, they’re fast and turnaround is very prompt. They’re a pleasure to deal with.”

Air Support is slated to start airing in September at US Navy air shows. When asked how his client felt about the audio he provided, Farr offered this response. “My client was very happy because we captured a wide variety of really terrific sounds,” states Farr, “many of which they previously had to Foley (real-time studio sound effects) to achieve. Lectrosonics’ Digital Hybrid Wireless™ technology produces “cabled” sound quality and much of their gear also provides backward compatibility with legacy equipment—both from Lectrosonics as well as other equipment manufacturers. I provide a lot of consulting services to my various clients, and the only wireless systems I recommend are Lectrosonics. Their performance and backwards compatibility are key features that really separate the company’s products from the competition.”