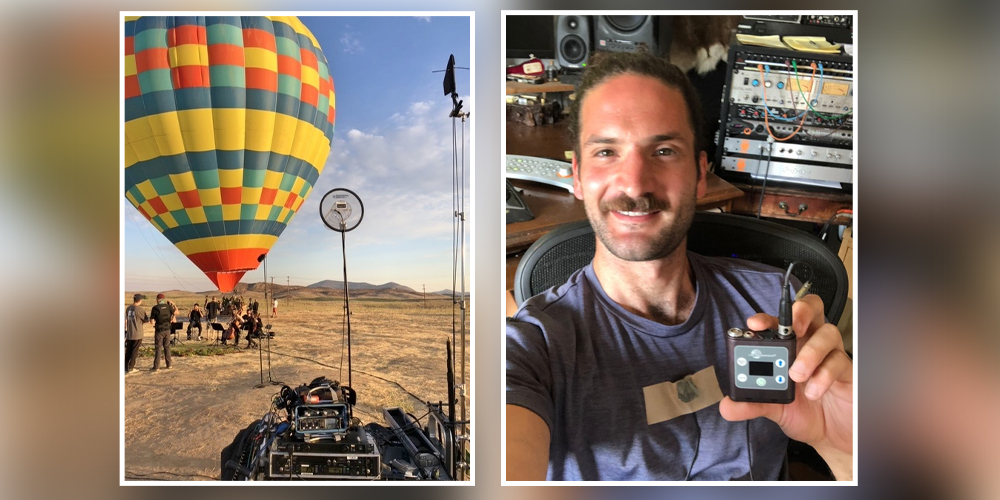 “Both times, the results were like I was next to the talent hardlined directly into the recorder without even using RF. Everything worked so well — range, audio quality, time code, the split mode — that when the shoots were over, I just bought the gear.”

Los Angeles, CA (August 24, 2020) — When it comes to wireless, Jack Goodman gives “on air” a whole new meaning. One recent gig involved capturing audio for rapper and singer Dominic Fike, who jumped out of a plane to reveal his new album What Could Possibly Go Wrong and chronicled the adventure in the YouTube video “Dominic Fike Presents: Fight or Flight.” Another was a segment for the August 19 episode of The Tonight Show Starring Jimmy Fallon, in which musical guest Trevor Daniel lifts off in a hot air balloon mid-performance. For both, Goodman needed to capture audio before, after, and during Fike’s descent and Daniel’s ascent — with no interruptions. For Fike’s video, he turned to the Lectrosonics MTCR miniature time code recorder to supplement his kit of UCR411a receivers paired with legacy UM400a transmitters. On the Tonight Show, seamless recording of Daniel’s performance was accomplished with an HMa plug-on transmitter and wideband Venue2 receiver.

“I discussed the Fike shoot with the rental folks at Trew Audio in L.A., and it was clear we needed a recorder on Dominic’s body,” says Goodman. “It needed to hold onto time code once we’d jam-synced it. Being extremely compact was also a bonus.” Recording Broadcast WAV files to a MicroSD card at 24-bit/48kHz resolution, the MTCR ticked all these boxes. Goodman describes how he kept the audio flowing from Fike’s first step onto the plane to his touchdown: “The wireless was basically for everything except when he’s falling. For that, we needed to capture anything that he said as well as ambient sounds like the wind and the chute opening. Sound from a GoPro was not going to give us that vibe. We taped up Dominic with a Sanken COS-11D lav mic, which fed both the MTCR and his transmitter.”

There are no retakes on a skydive, and the situation is the opposite of having any control over one’s sonic environment. Goodman explains how the MTCR’s split recording mode prepared them for this: “It records two tracks at once — one with 18dB less gain. When Dominic jumped, I didn’t know how loud he would scream. I didn’t know how loud the parachute would sound when it opened. I didn’t know what to expect, and we only had one chance. So, between those two tracks, I knew that I’d have material that worked in post no matter what. That feature was essential for us being able to do this shoot at all.”

The MTCR’s solid sync was also key. “I’m mainly a post mixer,” he notes, “so good time code is important. We jam-synced the MTCR, my Sound Devices 633, and cameras from a Betso Box, and the MTCR must have run three hours total. Lectrosonics recorders are more stable holding on to jammed time code than their major competitors.”

The results exceeded Goodman’s expectations. “When he jumped, I was surprised at the range. I heard him scream for about 30 yards, but the signal didn’t cut until over 100. Of course, all that audio was still going into the MTCR. I was surprised that nothing clipped. At any rate, I was able to assemble everything from his lav into this hyper-real moment.”

For Trevor Daniel’s airborne medley of “Falling/Past Life” on The Tonight Show, Goodman had to ensure “that we got crystal clear mic. We only had one take, and the production was like, ‘Don’t blow it!’ Not only did we want that audio for post, but we needed it for the monitors of the musicians on the ground, which included a string quartet. Midway through the song, Trevor gets in the balloon and goes up, up, up. The HMa was plugged onto a pretty basic dynamic mic, I think a Beta 58A, and I was shocked at the range. Goodman worked together with Sean Hokanson, one of the crew hiding in the basket as a backup running a whole other receiver and recorder, and Joseph Fiorillo as an additional sound mixer. Turns out we didn’t need the backup. Maybe it was our unobstructed line of sight, but I swear that balloon got over a mile away and the signal on the ground didn’t flinch. We even heard Trevor saying, ‘There’s no way they can hear us now, is there?’ The other two mixers and the playback engineer were stunned.”

Goodman also gives the nod to Lectrosonics’ durability. “I can’t tell you how many times I’ve dropped them,” he laughs. “In addition to throwing them out of planes, I’ve had them on dirt bikers and at muddy monster truck rallies, in the rain. On one big shoot which will remain nameless, somebody bumped into my audio cart and knocked the whole thing over. I had five UCR411a receivers just stacked there loose. All of them hit the concrete — hard. And all of them still worked.”

On both assignments, Goodman’s final praise of Lectrosonics was that the rental company didn’t get their items back. “Both times, the results were like I was next to the talent hardlined directly into the recorder without even using RF. Everything worked so well — range, audio quality, time code, the split mode — that when the shoots were over, I just bought the gear.”
Click here to see Trevor Daniels hot air balloon performance on the Jimmy Fallon show with the Lectrosonics HMA.