Comedian/Guitarist Mike Rayburn Takes To The Stage With Lectrosonics 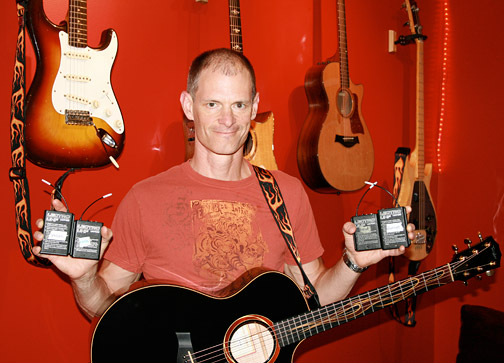 Aldie, VA… While comedian/guitarist Mike Rayburn’s concert appearances generate lots of laughs from h is audience, there’s nothing humorous about his dependency on his wireless equipment. Based in a suburb of greater Washington, DC, Rayburn’s antics keep him in the spotlight during more than 120 performances a year—with a schedule that takes him not only throughout the Americas, but throughout Europe as well as Caribbean and Hawaiian destinations. Wherever he may be, his Lectrosonics wireless systems provide the freedom of movement and the sound quality he requires to keep his act at the cutting edge.

Mike Rayburn is, quite simply, a very funny artist. He has performed at New York’s Carnegie Hall eight times and has performed more than 4,000 shows worldwide. In the 90’s and early 2000’s Mike was voted America’s Campus Entertainer of the Year three times in four years and he has also been referred to as The World’s Funniest Guitar Virtuoso. With a new album slated for release June 24th, Mike Rayburn at Carnegie Hall—on the Comedy String/Sony Red label—will be available at major record chains and is currently available online through iTunes, Rhapsody, eMusic, Amazon.com, his own website (www.mikerayburn.com) and many other destinations. Select cuts from the CD are currently in rotation on XM Comedy, Sirius Comedy, and on countless morning radio shows nationwide.

Rayburn hits the road in support of his new CD on June 23rd. His first appearance is scheduled at New York City’s Rockwood Music Hall, with subsequent appearances in Toronto, Canada and Riviera Maya, Mexico. Armed with his acoustic/electric guitar plus twin Lectrosonics UM100 UHF multi-frequency beltpack transmitters and UCR100 UHF beltpack receivers, Rayburn travels light—for which he is most thankful.

“I love the fact that these units are extremely small and light,” says Rayburn. “I use a Lectrosonics MI33A active guitar cable for the connection between my guitar and one of the two transmitters. The second setup is for my vocal mic. My dual system wireless setup is pretty minimalist, so it never gets in the way while I perform. When I travel, my wireless equipment goes in a tiny camera bag. To have the freedom of movement onstage and the portability that my Lectrosonics equipment provides is terrific.”

Rayburn was equally enthusiastic about his equipment’s sound quality, ease of use, and reliability. “I’ve had my equipment for 7 years,” said Rayburn, “and the sound quality has been great all along and I find it very easy to use. In all this time, I've never had a problem with my wireless units. They have always been rock solid.”

From time to time, Rayburn has had operational questions about his equipment and, here too, he is very complimentary about Lectrosonics’ technical service and support. “I had occasional questions about using the cable that interfaces my guitar with the transmitters,” notes Rayburn, “and I’ve been very pleased with the company’s support. Everyone I’ve spoken with clearly has a thorough understanding of both the equipment and the intended application for which it is used and because of this; I’ve received the information I needed promptly. The Lectrosonics staff has also been very easy to deal with. They’re always courteous and extremely responsive.”

Before heading off to prepare for some upcoming engagements, Rayburn offered this closing thought about his Lectrosonics experience. “I’ve noticed during my travels that all the sound reinforcement techs have a very positive opinion of Lectrosonics equipment. While I had no knowledge of the company prior to making my purchase, I’ve since encountered many people who have a very favorable opinion of Lectrosonics. Considering my own very positive experience with both the equipment and company’s personnel, I can understand how Lectrosonics has become so popular. They build great sounding wireless equipment that works consistently and never gets in the way.”

To learn more about Mike Rayburn, visit him online at www.mikerayburn.com.