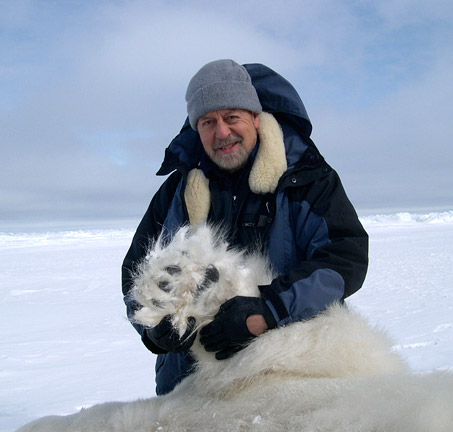 Kaktovik, Alaska… With each day seemingly colder than the one before, a combination of scientists and a BBC (British Broadcasting Corporation) production crew recently set out to document the effects of global warming on the Arctic frontier. With a focus on the plight of the region’s Polar Bears as well as the melting permafrost, the group worked from their base camp in this northern village on the Beaufort Sea coast and traveled by helicopter in search of the highly dangerous, yet vulnerable animals. Capturing audio on a mission of this nature is challenging enough, and in this harsh environment—with sub-zero-degree temperatures and high wind—the task becomes even more difficult. Wireless microphones were a necessity and, to ensure production quality worthy of the BBC, the mission critical performance attributes of Lectrosonics wireless technology were placed into service.

Scot Charles, owner/operator of Blue Charles Productions of Seattle, WA, was contracted to provide location sound for the documentary—named Planet Meltdown. Charles, whose company also provides audio post production services, is a veteran location sound engineer who, over the years, has worked on numerous projects broadcast over the PBS, NBC, and CBS networks. When queried about his choice of wireless microphones for this project, Charles offered his reasons for using Lectrosonics equipment.

“The weather there was extremely cold and windy,” explained Charles. “On a job like this, you need to know your gear is going to work, because there’s no second takes. Mobility was also a big issue. My subjects weren’t actors and they needed to move about freely as they medicated and tagged the bears. When you’re working on an 800 pound bear, the gear must absolutely work the first time, because the bear isn’t going to wait on you while you make a change if something fails!”

“I carried eight systems for this project,” notes Charles, “though at any given time, I was actually running just 4-5 of them. I chose Lectrosonics because their gear is designed in such a way that it’s easy to use in the field. When you need to clip a transmitter onto a subject quickly and know that it’s going to stay there until you’re ready to remove it, you don’t want to be fiddling around with tape, little bags, and other accessories. You want to be assured that transmitter is going to stay put. Lectrosonics has obviously put a lot of thought into this sort of thing. The metal cases are rugged and the squeeze clips are easy to use and very secure.” 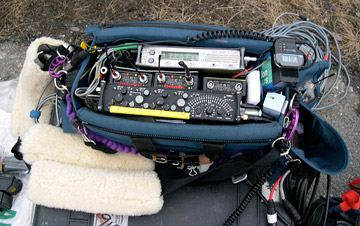 Charles also often used a wireless boom mic to capture ambient sounds in addition to the RF packs that he had on the scientists and the correspondent. “The UM450s are designed to output a hotter signal than my other transmitters,” says Charles, “so I used them for the RF links to camera. I did redundant back-up on the 744T of the camera tracks, as well as wild stuff such as ‘bear grunts’ and ambient sounds—and burned those tracks to DVD for use later during audio post production.”

Reflecting on the project as he prepared for his next endeavor, Charles offered this closing thought. “Both the BBC and I were very happy with the audio on that project,” said Charles. “It really helped capture the essence of what we experienced up there. Global warming is occurring at a much faster rate than most people ever anticipated and we need to get a handle on the situation. I believe this effort will help people understand the urgency of the matter. Anything that each and every one of us can do on a personal level to contribute to the cause would be well served.”

For additional information on Scot Charles and Blue Charles Productions, visit the company online at www.bluecharles.com.