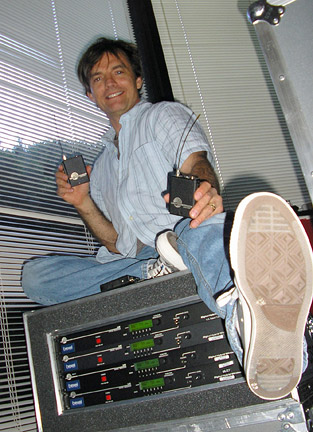 Washington, DC… Located at the intersection of Pennsylvania Avenue and Sixth Street, N.W., on America’s Main Street between the White House and the U.S. Capitol and adjacent to the Smithsonian museums on the National Mall, the new Newseum is a 250,000-square-foot museum of news—offering visitors an experience that blends five centuries of news history with up-to-the-second technology and hands-on exhibits. Featuring seven levels of galleries, theaters, retail spaces, and visitor services, the Newseum offers a unique environment that takes museum-goers behind the scenes to experience how and why news is made, and throughout the facility Lectrosonics wireless systems are deployed.

Herndon, VA-based Bexel ASG, a provider of broadcast audio and video products that also serves as a consultancy to the broadcast industry, designed and installed the wireless systems throughout the Newseum. Jim Dugan Sr., Project Engineer for Bexel ASG who is responsible for the integration of wireless products in the broadcast markets, oversaw the deployment of the large distributed antenna system at the Newseum.

In discussing the challenges the Newseum project presented, Dugan was quick to emphasize the facility’s size and the volume of equipment installed there. “The sheer magnitude of the Newseum, the amount of equipment they wanted to integrate, and the number of locations throughout the complex required us to integrate a large scale managed antenna system,” explained Dugan. “We distributed 9 Lectrosonics IFB transmitters and 12 RFPL base transmit frequencies simultaneously to 8 different studios and exhibits throughout the facility using fiber and coax cable. There are also approximately 75 receive frequencies, including 25 Lectrosonics UM400 bodypacks, 25 UT transmitters, and 24 RFPL beltpacks. The 13 Lectrosonics T4 transmitters are extremely robust when combined and redistributed. The T4’s are extremely clean IFB transmitters and are a great choice for these large installations.”

In addition to several custom Bexel products installed at the Newseum, Dugan found Lectrosonics’ VR Series Venue modular receiver systems to be particularly useful. “We wanted to be able to move receivers and re-allocate the usage of systems,” said Dugan, “so the VR frame concept was perfect. Having a 1RU form factor and a modular design that accepts upwards of 6 receiver modules, this enabled us to place 18 wireless channels into 3 rack units, which was ideal. The Lectrosonics VRT receivers—with their tracking filters inside the VR frame—all fit the requirements of this project quite well. As part of all this, we also used 3 Lectrosonics UMC16B UHF antenna multicoupler systems for wireless mic distribution.”

In addition to the aforementioned equipment, the Newseum’s arsenal of Lectrosonics equipment also includes 25 R1a beltpack receivers, 2 SM transmitters, and 4 UCR411a compact receivers with tracking front ends. The equipment is placed throughout the Forum Theater, the Document Theater, 3 conference rooms, 4 mobile equipment carts, the central equipment room, and both Studios A and B.

Studio B is the flagship facility at the Newseum. The studio overlooks the US Capital Building approximately six blocks down Pennsylvania Avenue and recently occupied by ABC News. Studio B now serves as the home to This Week with George Stephanopoulos. For his broadcasts, Stephanopoulos is using Lectrosonics SM transmitters and Venue receivers. The managed antenna system installed there enables him to freely roam throughout the Newseum’s Atrium and the studio.

When queried about his choice of Lectrosonics equipment for the Newseum project, Dugan offered this assessment. “With larger RF systems of greater than 20 frequencies, I’ve found that Lectrosonics outperforms any other brand. In this installation, we had approximately 100 UHF frequencies. The transmitters are very stable and are they are not as susceptible to intermodulation as other competing systems. The transmit spike on the UM400 bodypack is clean and consistent, and they have no unwanted extraneous RF energy. Lectrosonics has done a great job with isolation in their wireless products.”

The Newseum project’s design phase was initiated in early 2007, with installation commencing in February 2008 and completing in April. Dugan reports everyone has been extremely pleased with the results. “The Newseum’s designers were building the latest and greatest facility of its kind in the industry and I knew that to be on par, we had to step it up,” said Dugan. “Throughout this project, Lectrosonics’ support was first rate—thanks to Howard Kaufman—and the Newseum now has an antenna system that enables their wireless microphones, IFB, and RFPL’s to transmit throughout the entire broadcasting area and museum. The production staff is still getting used to having so much wireless flexibility. When they realized they were able to roam around the entire city block in front of the building on Pennsylvania Ave, they were ecstatic. The Newseum is a showcase facility in every aspect and I can’t imagine doing this project without Lectrosonics.”

For additional information about Bexel ASG, visit the company online at www.bexel.com/asg/.