Catching The Big Wave With Lectrosonics 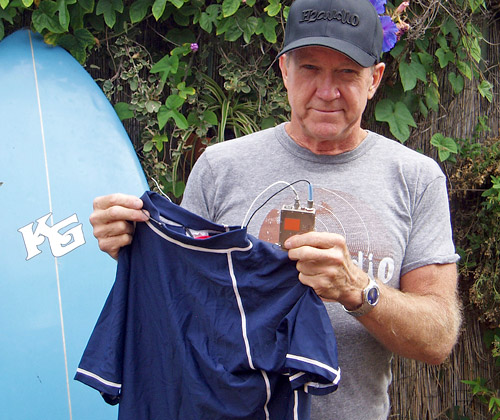 Rio Rancho, NM… If there’s one thing that, above all else, brings electronic equipment to its knees, it’s water. The very prospect of wiring a surfer with the necessary equipment to capture the ambient sounds that occur while riding the waves is enough to cause most audio pros to say, “Not with my gear!” For years, onscreen surfing action was akin to the silent movies of yesteryear—until Tim Denmark came along. Equipped with an arsenal of Lectrosonics wireless systems, Denmark has created a niche for himself that brings the excitement of surfing—complete with crashing waves and the slap of the surfboard over the water—right into the homes of television viewers the world over.

Denmark, owner/operator of Leucadio, CA-based H2audiO, which specializes in professional audio for aquatic sports, has become the “go-to” guy whenever the actual sounds of surfing are required—be it for TV, film, or advertising. When he’s not working in the water, he also serves as the Racer Radio Mixer for NASCAR on the Fox and TNT networks, as well as an RF audio engineer for the NFL games televised over the Fox network. Whether in the water or on land, Denmark’s gear has been exposed to the most extreme conditions—and it keeps on going.

An avid surfer, Denmark reflected on his decision to make surf audio his specialty. “I love the water and I’m a genuine surfing enthusiast,” reports Denmark. “I remember surfing the famous ‘Pipeline’ in Hawaii, where all the big tubular waves occur, and being really impressed with how loud it was. As an audio professional, I was bothered by the fact that whenever I watched a televised surfing competition or a movie that included surfing, there never seemed to be any audio. If audio existed at all, it was handled via Foley (real time sound effects during post production) and it just didn’t sound the way I knew it should. I knew it could be done, so I began experimenting.”

Denmark’s method for capturing real surfing audio is so unique, it’s actually patent pending. His current equipment roster includes 24 Lectrosonics MM400 A and B Series transmitters and 10 Lectrosonics UCR211 UHF receiver systems. “My MM400’s have been great,” notes Denmark. “I love the fact that these models have removable transmitting antennas, which for this application, is ideal. Lectrosonics has been very supportive of my efforts and has provided me with extended transmitting antennas for my units.”

The process of wiring a surfer for audio involves a specially made Lycra® shirt, or rash guard, that has a pocket on the inside middle of the back. Sewn into the rash guard is a channel that extends from the pocket up to the collar. The MM400 transmitter is then secured into the pocket with Velcro®. The transmitter’s antenna and a Countryman B3 lavaliere microphone with a water resistant capsule extend from the transmitter up the shirt’s channel to the collar. The antenna is attached to the back of the shirt while the mic is affixed to the front of the collar. Depending upon the nature of the event, Denmark and his Lectrosonics UCR211 receivers equipped with high powered, directional, helical receiving antennas can be found on land, on a boat, or even on a scaffold perched far out over the water.

“This setup enables me to capture every audible sound as the surfer rides,” says Denmark. “The most visible, televised surfing event on a major network is the X Games on ABC. For this, I’ve had as many as 15 people at a time wired and in the water with mics. This included two teams, each with 4 surfers, 2 alternates, and a coach, plus the show’s announcer—equipped with a Lectrosonics MM400B and R1a IFB transmitter/receiver system for communication with the show’s production crew. Through the entire competition, the audience could hear the interaction between the surfers and their coach in addition to the ambient sounds of the water.”

As one would expect, Denmark’s equipment requires periodic servicing, and he’s absolutely enamored with Lectrosonics’ customer and technical support services. “I’ve put this gear through the worst possible conditions any electronic equipment should ever face,” said Denmark. “Through it all, I’ve consistently received excellent audio quality and my equipment has held up amazingly well. Lectrosonics has always been really good about servicing my equipment and providing fast turnaround. With great sound quality and the ability to withstand the worst possible conditions, I couldn’t be any happier.”

For additional information about H2audiO and Tim Denmark, visit the company online at www.h2audio.net.