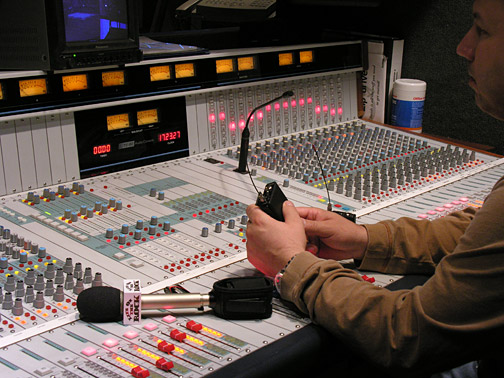 Irondale, AL – February 2008… Whether it’s a mass, a news report from the field, or one of its numerous shows, Lectrosonics wireless systems have been deemed ‘indispensible’ to the everyday operations of EWTN Global Catholic Network. As the largest religious media network in the world, transmitting television programming 24 hours a day to more than 146 million homes in 140 countries and territories on more than 5,200 cable systems, wireless cable, Direct Broadcast Satellite (DBS), low power TV, IPTV platforms and to individual satellite users, EWTN’s broadcast operations have come to depend on the sound quality, reliability, and freedom of movement that only Lectrosonics wireless microphone systems can provide.

For Kris Kirchler, Senior Audio Engineer for EWTN Global Catholic Network, the versatility of their Lectrosonics equipment — coupled with its dependability — has found its way into every facet of the broadcaster’s daily production tasks. “We’ve been Lectrosonics users for quite some time,” says Kirchler. “We use five sets of Lectrosonics’ older 195 series wireless systems, which include a portable receiver with a belt pack transmitter for use with a lavaliere microphone as well as a plug-on adapter for handheld microphones, and we also have two of the 200 series wireless systems for use in our studio. This gear may be a bit dated compared to the latest wireless equipment, but it sounds great and it’s been absolutely bullet-proof.”

EWTN’s production schedule encompasses a wide range of programming. The network has a close affiliation with nearby Hanceville, AL-based Shrine of The Most Blessed Sacrament, for whom they routinely broadcast a variety of events. Similarly, the network broadcasts a live, English language show five nights a week, Spanish language productions twice weekly, along with a daily mass from EWTN’s studios.

Kirchler reports that, in addition to the 195 and 200 series products, EWTN recently purchased a new Lectrosonics Venue modular receiver system with the UM400a Digital Hybrid Wireless™ UHF belt pack transmitters. “We purchased this equipment based upon the success we’ve had with our earlier systems,” said Kirchler. “Lectrosonics wireless systems are by far the most dependable systems we’ve encountered and their sound quality is second to none. The clarity of these systems has to be heard to be appreciated. The design of the electronics systems is just outstanding.”

With their new Venue and UM400a wireless equipment, which uses Lectrosonics patented Digital Hybrid Wireless™ technology, EWTN extends the usefulness of their earlier investments, as the newer systems provide a compatibility mode that facilitates communication with earlier generation equipment such as the 195 and 200 series products. This capability extends the life of these systems and provides even greater return on investment. “A lot of manufacturers simply abandon their earlier products,” notes Kirchler, “but not Lectrosonics. Even with our new wireless system, we can still make use of our older equipment.”

When queried about those qualities he values most about Lectrosonics wireless equipment, Kirchler responded with the following. “The peace of mind that comes from having a highly dependable system is certainly high on my list,” states Kirchler. “No matter what conditions I may find myself working under, I feel confident the Lectrosonics systems will come through for me. Also, the selectable frequency agility provided by the 200 series and, of course, our new Digital Hybrid system is extremely useful because, as our programming roster grows and we introduce other wireless equipment into our production environment, we can count on the Lectrosonics systems to always have an open, clear frequency available. These factors plus the crystal-clear sound quality have made me a big fan of Lectrosonics equipment.”

Kirchler was equally enthusiastic about Lectrosonics’ customer and technical support services. “It’s not uncommon for our gear to take a real beating on some of our worldwide field reporting projects,” Kirchler said. “Occasionally, we’ve needed service on these units, and Lectrosonics has been great to deal with. I’ve been able to call the company, get an RA, send the equipment in, and in no time at all, it’s on its way back to me. Likewise, Brian Hannie, our local Lectrosonics rep, has been tremendously supportive. That’s what I call taking care of the customer.”

For additional information about the EWTN Global Catholic Network, visit the broadcaster online at www.ewtn.com.