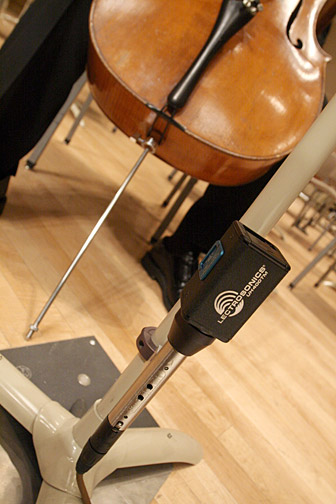 Boston, MA… The Boston Symphony Orchestra is, without question, one of the world’s premier orchestras. Hence, one would only expect that those tasked with recording the orchestra’s performances be every bit on par in terms of their application knowledge and the quality of the recordings they produce. Such is the case with Boston-based Soundmirror, Inc., a fully digital recording and post-production company specializing in acoustic music and sound for picture. For quite some time, the recording crew responsible for capturing the orchestra’s performances wrestled with the best means of recording the celli. They found their solution with a wireless microphone system from Lectrosonics.

According to John Newton, President of Soundmirror, Incorporated, “For much of the orchestra, we use a substantial number of hanging microphones, but since the cello needs to be miked from a position close to the floor, hanging mics simply weren’t an option. We get our best results with a boundary layer microphone positioned close to the floor in front of the instrument and, thus, we mount the microphone on the principal cellist’s stand. In doing so, we capture the first two players, along with a bit of the players sitting behind or around them.”

While the physical positioning of the microphone is optimized for this particular instrument, other challenges routinely arose—among them: safety issues resulting from the attached microphone cable, which was routinely in the path to the conductor’s podium, along with microphone positioning issues resulting from the fact that the cellist’s music stand had to be moved and then re-situated prior to the start of performances. “While we didn’t have a microphone stand in the way to complicate the situation,” said Newton, “we did, nonetheless, have to contend we frequent moving and re-positioning of the microphone mounted to the music stand. This must be done by the cellist because there simply isn’t time to have a stage hand or engineer handling this. Further, the possibility of having the mic cable becoming disconnected was yet another unsettling issue.”

“Our present setup consists of the Schoeps BLM microphone, which is affixed to an aluminum plate that is mounted onto two of the music stand’s three legs,” said Newton. “We then made a bracket on the base of the music stand that includes an XLR connector that we can snap the transmitter into, and we set it up so the battery compartment and the gain control points up into the air. This way, we can easily change the battery prior to the start of a concert and, again, at intermission periods. Everything is affixed to the base of the music stand and out of the way. Now, the principal cellist can move the stand to open the pathway to the podium and, afterwards, easily re-position it—with the microphone properly oriented toward the cello. The entire setup is rugged and compact and, as a result, the stage crew can move this music stand around just like any other.”

When queried about the performance attributes of the Lectrosonics equipment, Newton offered the following assessment. “The sound quality of the Lectrosonics equipment is exceptional,” says Newton. “This doesn’t sound like a wireless microphone. The system sounds as every bit as good wirelessly as when the microphone is used with a cable. We’ve also been very impressed with the system’s ease of use and reliability. Boston’s Symphony Hall is located in a rather crowded RF environment. The R 400A receiver has a very nice feature where it searches for the best open frequency. We’ve used this capability to configure it and the transmitter to the same frequency and haven’t experienced a single RF issue. Additionally, the UH400TM transmitter provides Phantom power to the microphone, and this was another critical consideration. The entire system is easy to work with and it’s been absolutely bullet-proof. We’re looking to expand our wireless capability, and have ordered a Venue receiver system with three channels and three UH400TM transmitters. My hope is that, in time, we’ll expand the system and incorporate some bodypack transmitters for spoken word programs and other applications.”

For additional information about Soundmirror, Inc., visit the company online at www.soundmirror.com.