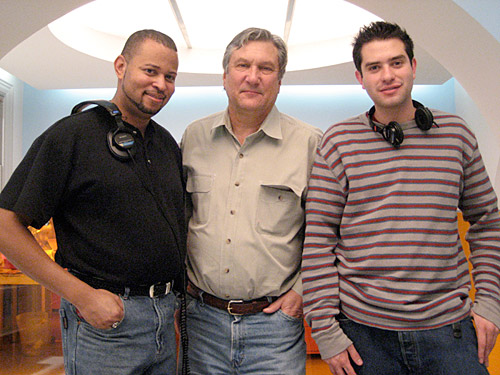 Hollywood, CA – December 2007… When it comes to outfitting the actors and actresses of contemporary TV shows with wireless transmitters for capturing location sound, the snug, form fitting clothing so popular these days frequently presents the audio crews with a unique set of challenges. Such was the case for Devendra Cleary, Ace Williams, and James Thornton, who handle location sound for popular network television shows. They found the solution to this vexing issue with a number of products from the Lectrosonics catalog.

According to Devendra Cleary, who works as Utility Sound Technician on one of television’s hit one hour episodics, “I’m in charge of the daily equipment setup and tear down, maintaining timecode, as well as second boom duties. I’m also responsible for wiring the actors. With high fashion being such an important part of the show’s premise, having wireless transmitters that remain completely out of sight and that don’t interfere with the clothing the actors and actresses wear is critical. Our Lectrosonics SM Series transmitters meet those requirements better than any other equipment on the market.”

Cleary, along with boom operator Ace Williams and Production Sound Mixer James Thornton constitute the location sound crew responsible for capturing the dialog on the set. In addition to their three SM transmitters and their SMa transmitter, they also use two UM400a belt pack transmitters—all of which employ Lectrosonics’ proprietary Digital Hybrid Wireless™ technology. Their receiver system is none other than Lectrosonics’ legendary Venue Modular Receiver—stocked with 6 VRT Digital Hybrid Wireless™ modules.

As much of the clothing the actresses wear is frequently tight fitting, the diminutive size of the Lectrosonics SM and SMa transmitters has been extremely important. “Even if it’s a typical looking suit,” says Cleary, “it’s frequently very form fitting, so you certainly don’t want to see a bulge. The SM and SMa transmitters are easy to conceal, and if that doesn’t work, we’ll outfit the actress with a thigh pack (a neoprene strap that goes around one’s leg) that holds the transmitter and gets worn under the dress.”

“Most of the time, we’re able to place the transmitter in the small of the actress’ back,” Cleary continued. “With one of the lead actresses on the show we’re currently working, she wears a Countryman B6 mic in her wig, and the wire runs down her back to the transmitter, which is located in small of her back.”

Cleary also serves double duty as the show’s second boom operator. “That’s where the UH400A transmitters come in,” says Cleary. “We use them for a quick second boom, and they also get used for various handheld applications. The UH400A is an extremely versatile unit.”

Cleary and his associates use a fully stocked Lectrosonics Venue modular receiver outfitted with six VRT receiver modules. Their Venue receiver system is also outfitted with Lectrosonics’ SNA600 collapsible dipole antenna kit, which is ideal for situations where a full 360 degree receiving pattern is required as opposed to a directional pattern. “The setup is perfect for this show,” states Cleary. “We can set up anywhere on stage and the antenna always brings in strong signals. The stages where we work can be a crowded RF environment. We frequently have other shows shooting on the lot simultaneously, and we’re all on the same frequency blocks—21 and 22. But the Lectrosonics system makes it very easy for everyone to coordinate our frequencies and live together in harmony. We’ve been trouble free for so long, I’ve forgotten what RF hits sounds like.”

When queried about the equipment’s performance and the level of support he’s experienced from Lectrosonics, Cleary offered an upbeat assessment. “The entire system has been fantastic,” said Cleary. “We actually started working our show last season without Lectrosonics gear. Then Jim bought the new equipment and I was ecstatic. The wardrobe demands of this show made the SM and SMa transmitters absolutely essential. With the sheer number of RF signals being used on the various sound stages, the Lectrosonics equipment made everyone’s work that much easier in terms of identifying open frequencies. On the few times that we had any questions, the company’s tech support team has always been very responsive. I’ve been so impressed with Lectrosonics; I’ve since purchased my own Lectrosonics system.”