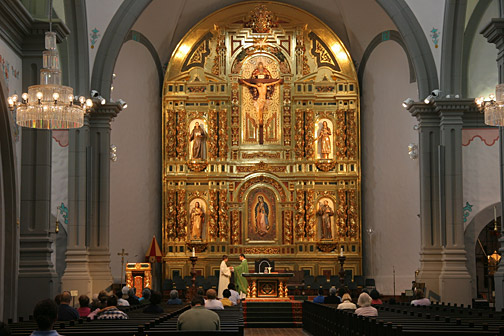 San Juan Capistrano, CA… Few things are more frustrating than bad sound, and for church leaders at Mission Basilica San Juan Capistrano, a Catholic Church a short hop North of San Diego, the inability to consistently obtain clear audio at manageable levels was an issue that could no longer be ignored. Designed to coincide with the installation of a new and incredibly ornate, gold retablo (an artistic wall or surface) altar, and ambo (lectern)—all of which were hand crafted in Spain for the church—officials decided an upgraded sound system would also be deployed. To ensure freedom of movement and consistent audio performance from a setup that runs largely unattended, the new sound system incorporates wireless microphones and automated mixing capability from Lectrosonics.

Grand Rapids, MI-based MuSonics, an acoustics consulting firm, handled the design of the church’s new SR system, which was installed and completed in July 2007 by Audio Associates of San Diego, CA. According to Peter Borchard, MuSonics’ A/V systems designer, “The church was in dire need of a new automated mixing system. It was too easy for well-meaning, but uninitiated people to change the old automixer’s settings and inadvertently make matters worse. Church officials were eager to find a solution that would enable them to circumvent this problem and obtain good, repeatable audio performance.”

“The four belt pack transmitters are used with Countryman E6 over the ear microphones,” said Borchard, “while the fifth wireless microphone is a handheld model that can easily be passed from one person to another during services. By using the Lectrosonics Venue receiver system, which is modular and, hence, expandable, the church still has the capacity to add another channel should it be necessary at a later time.”

“The ability to expand the system was an important design consideration,” continued Borchard, “and this is yet another reason we went with the Lectrosonics DM1612. In addition to the five wireless mics and two hard-wired mics for the ambo and cantor (the church’s song leader), the mixer also accommodates a CD player and the outputs of a small tabletop mixer that is used for the small contemporary musical ensemble. Even so, there remain several open channels for future expansion.”

With the new wireless microphones and automated mixing equipment in place and operational, Borchard reports the new system has made a dramatic impact on the church’s services. “Quite simply,” says Borchard, “everyone at the church is thrilled with the new system’s performance. My main contact at the church is Father Arthur Holquin. We spoke just the other day and, once again, he reiterated how pleased he is with the equipment’s performance.”

Borchard is equally upbeat about Lectrosonics as a company. “I’ve been extremely impressed with both the performance and build quality of Lectrosonics equipment,” Borchard said. “Of equal importance, whenever I’ve had operational questions and needed to contact the company’s tech services department, everyone I’ve spoken to has provided prompt, courteous, and knowledgeable service. In my mind, Lectrosonics is a perfect example of what every American company ought to be.”

About the Lectrosonics DM1612 Digital Automatic Matrix Mixer
Featuring 16 mic/line inputs and 12 outputs with a full DSP-based crosspoint matrix that enables every input to be routed to any or all outputs, the Lectrosonics DM1612 is a powerful digital audio processing, mixing, and routing system that makes an outstanding choice for sound reinforcement and conferencing in boardrooms, courtrooms, worship centers, distance learning systems, hotels, and other applications with multiple microphones and loudspeakers. The DM1612 represents a milestone in DSP technology in its basic architecture and in its processing speed and efficiency.