"Love In" With Lectrosonics 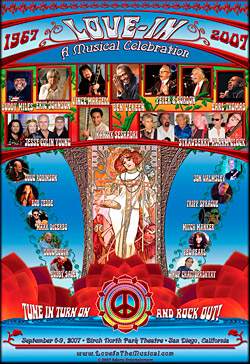 San Diego, CA – September 2007… For four days—September 6th through the 9th at the Birch North Park Theater —60’s era music enthusiasts were able to bask in the glory of Love In—A Musical Celebration, a lively theatrical/performance recognition of the music of 1967. Featuring 60’s British Invasion greats Peter & Gordon, Jesse Colin Young (of the Youngbloods), Buddy Miles (formerly with Electric Flag and Jimi Hendrix), the legendary psychedelic band Strawberry Alarm Clock, and a host of additional artists, Love In—A Musical Celebration served as the performance foundation for an ambitious video project that that will ultimately be available on DVD. Providing the freedom of movement and sonic integrity that simply did not exist during the 60’s, several performers were equipped with wireless systems from Lectrosonics.

“Love In—an Adams Entertainment production directed by Anthony Leigh Adams—also featured the talents of Tony Award-winning host Ben Vereen, along with performances by Grammy Award-winning guitarist Eric Johnson. Henry Austin, president of Escondido, CA-based Professional Production Associates, Inc. was the show’s audio producer. Austin, an industry veteran who serves as a consultant to equipment manufacturers in addition to overseeing the design, build, and implementation of audio systems for a wide range of live and studio projects, commented on the show and the impact wireless technology had on the event.

“Love In was a really special endeavor that was inspired by the success of last year’s Primal Twang project,” notes Austin. “In addition to some really electrifying performances, the show also included the projection of rare archival footage supplied by Wolfgang’s Vault, which did wonders to further re-create the entire experience. Not wanting to re-live every aspect of the 60’s, however, we also took advantage of modern technology, and a big part of the equation was the Lectrosonics wireless equipment.”

For Love In—A Musical Celebration, Austin brought in Karl Winkler from Lectrosonics, who set up, coordinated and ran the wireless system. “One of the keys to success with a complex show like this,” according to Winkler, “is careful frequency coordination. We had to account for local TV stations, IEMs, and communications systems. And, of course, some of the musicians brought in their own stuff, too.” The show’s wireless arsenal included two Lectrosonics Venue modular receiver systems that were fully stocked with twelve (six per unit) VRT receiver modules—providing twelve channels of wireless capability in two rackspaces. Transmitters included Lectrosonics UH400a UHF plug-on units for use with the Audix handlheld microphones, plus LM series beltpacks for Vereen and also for the documentary crew. IM series instrument transmitters and Lectrosonics R400A stand-alone receivers were also deployed with Vince Martel and Jon Walmsley for electric guitars. All models employ Lectrosonics’ Digital Hybrid Wireless™ technology. 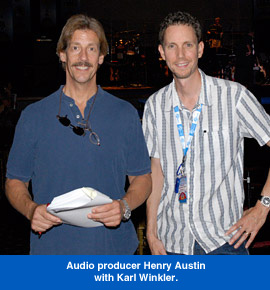 Lectrosonics’ Digital Hybrid Wireless technology uses a proprietary algorithm to encode 24-bit digital audio information into an analog format that can be transmitted in a robust manner over an analog FM wireless link. The result is much higher dynamic range—free from sonic artifacts— than wireless systems with a compandor are able to offer. These characteristics were critical considerations for Austin when he specified equipment for the Love In project.

“I’ll never forget my first encounter with Lectrosonics,” said Austin. “I was doing a show for Bob Taylor (of Taylor Guitars) during NAMM, when he informed me I’d be using Lectrosonics wireless gear. After my first hour working with the equipment, I was impressed with the natural sound quality and the dynamic range I was hearing, and I attribute this to the system’s lack of companding, which typically alters the dynamic range and the harmonic structure of an instrument. Acoustic instrumentalists are really in-tune with this sort of thing, and it can negatively impact their performance. The Lectrosonics gear sounds musically natural, and because of this, I’m a big fan.”

“In recent years,” continued Austin, “I’ve had a few occasions where I needed assistance and Lectrosonics’ technical support proved first-rate. For the types of mission critical projects I’m frequently involved with, this is very reassuring. They’ve even sent company representatives into the field to assist me. This is a company that makes great sounding, highly reliable products, and offers the best support. It was a pleasure to have Lectrosonics on-board with us.”