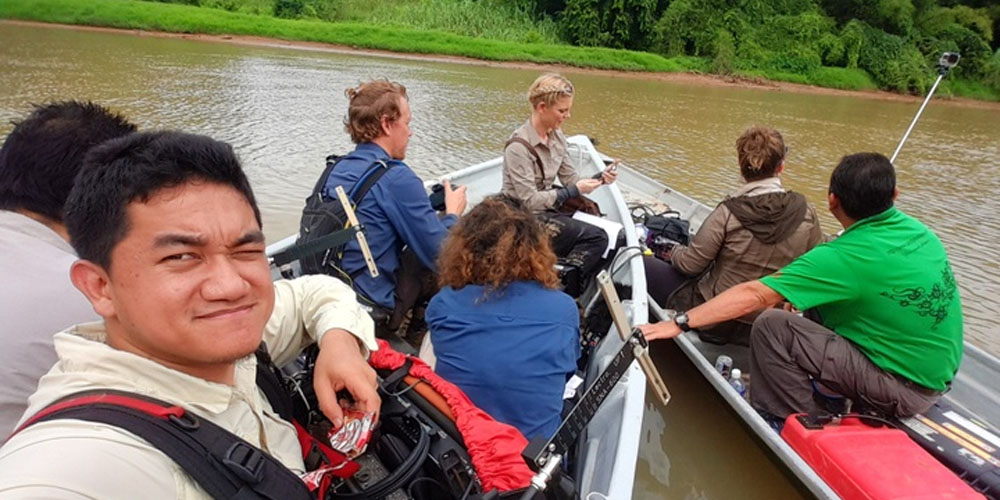 “Reliability is critical when you are deep in the jungle. I don’t have to worry when using Lectrosonics equipment and can direct my focus on everything else.”

Shah Alam, Selangor, Malaysia (April 26, 2016) — Positioned just a few degrees north of the Equator, Malaysia can present an unforgiving climate for field production sound mixers, with daytime temperatures exceeding 100 degrees Fahrenheit and average rainfall approaching 100 inches annually. But having used Lectrosonics Digital Hybrid Wireless equipment for over a decade, production sound mixer Fauzan Lukman was confident that he could rely on Lectro during a recent project in Borneo’s equatorial rainforest for the Smithsonian Channel.

“I was using the Lectrosonics Venue in Ratio Diversity mode, so I could get more critical reception,” Lukman recalls. The Venue was fully-configured with six VRT modules, enabling ratio diversity on three channels. “Even in high temperatures—and it can get close to 38 or 39 degrees Celsius in the afternoon—the Venue stayed up and running and I had zero problems with it.”

Carrying a single Venue receiver simplifies his bag on projects such as this, says Lukman. “It can give me up to six receivers and I don't need to fill my bag with an antenna distribution system as the Venue can handle it, so there's less cable clutter. There's also the weight advantage, compared to having, say, six individual receivers in my bag. I also use a power distribution system so I can power up my recorder and my Venue with the same battery.”
“For me, Lectrosonics equipment is the right choice for any environment. It's tough. I've probably used it in the hottest of temperatures. And in the rainforest it can pretty much turn from hot sun to heavy rain in an instant,” adds Lukman. “Reliability is critical when you are deep in the jungle. I don’t have to worry when using Lectrosonics equipment and can direct my focus on everything else.”

Lukman, who is based near Kuala Lumpur, the capital city of Malaysia, has been working on commercials, film production and corporate video for more than 10 years, relying on Lectrosonics equipment the entire time. “I was first introduced to Lectro gear when I started working at my previous employment back in 2005. When I left in 2012 to start my own company I knew I would only go with Lectrosonics. Nothing else would do for my wireless use because of its reliability and availability. Lectrosonics equipment is also well priced and has such a wide product lineup that you can choose the level that you want to invest.”

For the Smithsonian Channel project, Lukman also employed Lectrosonics UM400 wireless belt pack transmitters paired with Sanken COS-11 lavalier microphones. He also had a Sanken CS-3e shotgun mic fitted with a UH400 plug-on transmitter for use on a boom pole. “The older Lectrosonics U series transmitters are still rock solid,” he says. “I love their toughness.”

Although he took a Lectrosonics ALP650 amplified directional antenna with him, he didn’t even need to use it. “The two SNA600 passive omni antennas were enough for the job,” he says.

And on the rare occasions over the years when he has needed technical support for his Lectrosonics equipment, Lukman adds that he has been able to quickly find assistance. “I have found support via e-mail or on the Facebook group to be very fast and most problems are able to be solved with a work-around. It's only when there's a hardware problem—and in my 11 years of using Lectro I've only had the experience a few times that required sending something to the factory. Their service system is also very efficient, going in and out,” he reports.

“One of the other reasons that I am committed to Lectrosonics is the great communication that the company has with customers,” adds Lukman, and he offers particular praise for three individuals at Lectrosonics: “Karl Winkler [Vice President of Sales], is always available directly to interact with me via email. And Gordon Moore [President] and Larry Fisher [former President, now Chairman of the Board], continue to share their RF wisdom on JWSoundGroup.net and the Facebook page. I have learned a great deal about RF just by reading their posts over the years.”