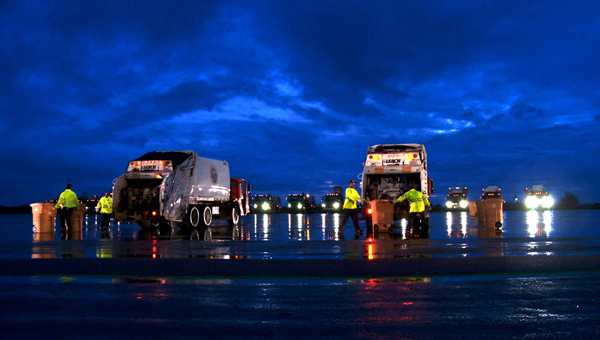 Austin, TX – September 2012… Few production environments are harder on electronic equipment than those commonly encountered by location sound professionals. From sun and sand to snow and ice, the gear must keep working. Failure here brings a project to its knees. For independent filmmaker Andrew Garrison, C.A.S., an assortment of challenging conditions put his Lectrosonics wireless transmitter and receiver systems to the test during the filming of his documentary feature TRASH DANCE, the story of a choreographer who finds beauty and grace in garbage trucks, and against the odds, rallies reluctant city trash collectors to perform an extraordinary dance spectacle.

Working with a Lectrosonics UM400a Digital Hybrid Wireless® beltpack transmitter mated with a UCR411a compact receiver, along with his trusty CR185 receiver and M185 transmitter (two early products that put Lectrosonics on the audio pro’s shortlist), Garrison brought TRASH DANCE to life. Since then, the film has gone on to win a Special Jury Recognition at SXSW (South by Southwest), the Audience Award for Best Feature at the Full Frame Documentary and Silverdocs Documentary Film Festivals, as well as the Audience Award for Best Feature Documentary at the Woods Hole Film Festival. Garrison talked about the audio challenges of the project.

“Most of TRASH DANCE was shot in 2009, with some segments done as far back as 2008 and extending into 2010 before the film’s premiere at SXSW in March of 2012,” Garrison reports. “We shot the film using the Lectrosonics gear recording directly to a Sony PMW-EX1 high definition camcorder, occasionally swapping out one wireless system for a camera mounted mic or a Schoeps with an MK41 capsule on a boom. While I don’t recommend it, I was often a one-person crew working both camera and sound. I needed performance I could count on. What was particularly notable in terms of the audio production on this project was the fact that we shot in extremely hot weather and in close proximity to all sorts of potential electrical interference.”

“With TRASH DANCE,” he continued, “we shot in 101-degree plus weather for months at a time—hopping in and out of trucks in order to capture all that we needed. At times, we worked from a distance while at other times, we were right up close. I was very impressed with the fact that the Lectrosonics gear delivered excellent range performance for those takes shot from afar. Equally impressive was the fact that when we were working in or right around the trucks—where all sorts of electrical fields were generated by the trucks’ motors—the equipment continued to work flawlessly. Simply put, the Lectrosonics wireless systems proved very rugged, had great signal, and sounded terrific.”

When queried about his Lectrosonics experience, Garrison was very complimentary. “From the favelas (hillside shantytowns) in Brazil to the frigid Chicago winters, I’ve used my Lectrosonics gear seemingly everywhere” he said. “These are my workhorses.  I’ve used these systems for everything from dramatic shoots like ‘SLACKER 2011’ to MTV’s ‘I Hate My Hair’ and the gear consistently delivers solid performance. The company’s support is equally impressive. Lectrosonics is one of the best models for any industry of prompt response and their customer service department always provides useful information. I am always impressed by the wealth of information available on the company’s website.”

With all the critical acclaim TRASH DANCE has received, Garrison has much to be proud of. Reflecting on the project and the manner in which the film’s audio was captured, he offered these parting thoughts. “It is amazing how clean and full the Lectrosonics 411 series sounds. I always captured the dialog I needed—even under the most difficult situations. This project literally would not have been possible without my Lectrosonics gear—especially the UCR411a.”