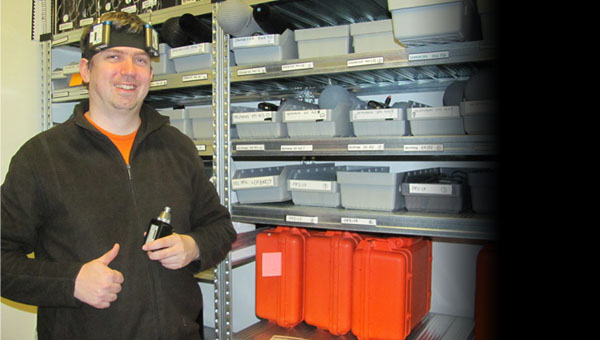 Prague, Czech Republic… Similar in popularity to shows like Jim Henson’s Muppets, Čtyřlístek is a show that follows the lives and adventures of four animated characters: Myšpulín, a badger; Bobík, a pig tough guy; Fifinka, a pretty dog woman; and Pinďa, a rabbit. Originally introduced in the form of comics, the stories have evolved into animation. As is typical of any sound for picture project, the production staff of Bystrouška Sound Studios frequently finds themselves in challenging production environments. To help them meet the demands of the show’s audio, they recently deployed wireless microphone technology from Rio Rancho, NM-based Lectrosonics.

Petr Novák is the production and rental manager for Bystrouška Sound Studios. With the aid of mixer Robert Dufek and assistant Jiri Graf, his crew spent much of December on what was once a military airfield (that is now used only occasionally) capturing the engine sounds of an old Skoda—an automobile manufactured in the Czech Republic. Armed with a pair of Lectrosonics HM plug-on transmitters, an SMDB/E01 super miniature beltpack transmitter, a VR Field battery powered modular receiver system stocked with six VRT receiver modules—all utilizing Lectrosonics’ acclaimed Digital Hybrid Wireless™ technology—and an ALP620 Log Periodic Dipole Array (LPDA) antenna, the crew found the process of acquiring the automobile sounds far easier than they envisioned.

“We’ve been working with Lectrosonics equipment since 2009,” Novák reports. Lectrosonics’ Digital Hybrid Wireless technology is very impressive. We needed the microphones mounted on the moving car to be in sync with static microphones positioned on the airfield. Using the wireless mics in this way saved us valuable time that we would otherwise have spent synchronizing the tracks using two recorders later. The Lectrosonics equipment was our best option, as we knew we could rely on Digital Hybrid Wireless Technology, the range the system provides, and its excellent sound quality with no dropouts. The dropout-free performance of this equipment was exceptional. We could just instruct the driver and press the record button without any worrying.”

When queried about the most challenging aspect of this project, Novák offered the following, “We were very concerned that the car’s engine would cause some RF interference. Further, there was a risk that the car itself might work as a Faraday cage and inhibit the signal from the transmitter—resulting in low signal quality with interference at the receiver. As it turns out, our concerns never materialized. It all worked without any problem. Based on prior experience with Lectrosonics gear, we had strong confidence this approach would work—and it did.”

Novák mentioned that he still has a Lectrosonics VHF wireless microphone system that dates back to the 1990’s and, it too, continues to operate flawlessly. Similarly, he was very complimentary of Lectrosonics customer and technical support services. “Lectrosonics provides excellent support services,” he said. “We’ve had a very positive experience with both the European service center in Munich, as well as with the corporate headquarters in Rio Rancho.”

As he prepared for another day in the field, Novák summarized his Lectrosonics experience. “Our work will become public next month, as the premiere is planned for January 31, 2013 in Prague,” he said. “The entire team is very happy. The Lectrosonics equipment saved us a lot of time and the results were much better and far more realistic than any library-based sound solution we might have used.”

To learn more about Bystrouška Sound Studios, visit the company online at http://www.bystrouska.cz/en/.