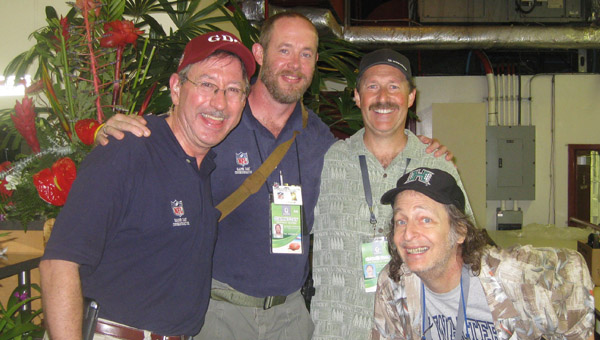 Honolulu, HI – March 2011… The 2011 NFL Pro Bowl, held January 30th at Aloha Stadium in Honolulu was a roaring success broadcast on FOX TV. This all-star event pitted the top NFL players in the American Football Conference (AFC) against those in the National Football Conference (NFC). For the 50,000 spectators in attendance—not to mention the millions of television viewers—this year’s game, where the NFC defeated the AFC (55–41), was eagerly anticipated. As the one who is responsible for enforcing the rules and maintaining the order of the game, it is vitally important the referee’s calls be clearly understood, so the wireless microphone technology must deliver bullet proof performance. That’s why Digital Hybrid® Wireless technology from Rio Rancho, NM-based Lectrosonics was deployed.

This year, Aloha Stadium and Pro Bowl veteran Senator Mike Michaels, CAS, an audio mixer and engineer based in Los Angeles, was responsible for ensuring the success of the referee’s wireless microphone system. Michaels and Honolulu-based partner Robert Dickerson had responsibility not only for the wireless microphone worn by the referee, they also had to ensure the successful delivery of that signal throughout the stadium, including the radio and television broadcasters, the NFL statisticians, while also being responsible for the stadium’s sound reinforcement system. Michaels discussed his equipment selection.

“For the first time, the NFL opted to use Aloha Stadium's wireless mic system,” Michaels explained, “and this decision resulted in our using three Lectrosonics REFUM referee transmitter systems in tandem with a fully stocked Venue receiver mainframe holding six VRS receiver modules and two Lectrosonics ALP500 shark fin antennas to aid reception. The Lectrosonics REFUM system incorporates the REFUM transmitter and the REFSWITCH muting device that can silence the transmitter’s audio without any clicks or pops. While we had two backup units available and ready on the field, we only used the one system that was originally outfitted on the referee because we encountered no issues whatsoever throughout the entire game.”

Now known as the Lectrosonics Mute Switch, the REFSWITCH muting device was conveniently placed on the referee’s preferred side to facilitate quick and easy control over his audio output. When issuing calls, the referee signals the official score keeper/statistician, who is located in the press box over the 50 yard line. In the process, he also faces the TV cameras. The referee’s ability to quickly and easily mute/unmute the audio feed is critical. A Countryman EMW Omni Classic lavalier microphone was used with the REFUM transmitter system. The Venue receiver system was housed in the stadium’s audio control booth.

When queried about the product characteristics that are most important in this type of application, Michaels offered the following. “This is a very high profile event and, as such, absolute reliability is essential,” Michaels said. “When you’re responsible for feeding signal to the broadcasters, the NFL, and throughout the stadium, there’s tremendous pressure on delivering dropout free, fail safe audio. In this respect, the Lectrosonics equipment has a proven reputation for delivering in these critical conditions.”

“Secondarily, it’s extremely important that the equipment doesn’t suffer any frequency interference,” Michaels continued. “The NFL appoints game day frequency coordinators who are empowered to oversee the usage off all radio frequencies by those who are credentialed to attend and support the event. The NFL's GDC's (game day coordinators) were responsible for managing close to 400 frequencies. They gave preference to my request for two clear frequencies in Block 26 that we had used previously plus a third frequency.  All were 100% solid.”

In high profile events of this nature, quality customer support is essential. Here too, Lectrosonics exceeded Michael’s expectations. “Larry Fisher, President of Lectrosonics, was extremely helpful in providing us with the latest developments in non-rechargeable lithium battery technology,” Michaels reports. “With the batteries he provided, we witnessed a solid 9.5 hours of battery life. The Pro Bowl required the transmitters to be enabled well in advance of the pre-game activities, so the longevity of these batteries was greatly appreciated. Now that’s customer service.”

Reflecting on a very successful project, Michaels offered this parting thought, “The Lectrosonics wireless systems proved to be 100% reliable—resulting in the complete satisfaction of the NFL, FOX, Aloha Stadium, and others who were at the receiving end of the referee’s signal. Events like this—where sound quality, range, and solid performance in a congested RF environment—really show what a wireless microphone system can do. For this gig, the total confidence, clear choice was Lectrosonics.”

For additional information about Senator Mike Michaels, CAS, contact him at This email address is being protected from spambots. You need JavaScript enabled to view it..