The primary purpose of diversity reception is to alleviate what is known as a "multipath dropout." This is a situation where both a direct RF signal and a reflection of the signal arrive at the same antenna. Since the reflected signal has travelled farther than the direct signal, it arrives slightly later and is out of phase with the direct signal. This can produce loss and a significantly reduced signal level arriving at the receiver antenna. Diversity reception techniques attempt to alleviate this problem with the use of two or more antennas and various combining or switching circuits.

A popular phrase, “true diversity,” arose in defense of dual-receiver audio switching designs over very low cost receivers that simply had two antennas mounted on a single unit. Diversity reception can be implemented by mixing or selecting the audio from two separate receivers, or by various antenna combining techniques ahead of the receiver. In reality, all receiver designs can aptly be called “true diversity” if they make use of two or more antennas that are receiving diverse (uncorrelated) signals.

Two diversity designs found in use today include Audio Switching Diversity and Ratio Diversity. Both offer some improvement in audio reception, but with a significant increase in equipment costs because of the need for two complete receivers. 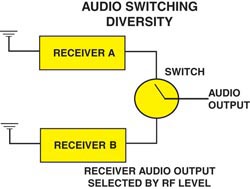 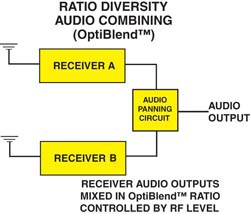 The Audio Switching design illustrated here follows the logic that if one antenna has a multipath problem, the other antenna is not likely to have a problem at the same time. This requires that the antennas be separated by at least a half wavelength of the operating frequency (preferably even more). One of the shortcomings of this approach is that only one of the two receivers is being used at any given moment. The switching activity typically activates only when the incoming RF signal level drops to a very low level.

Ratio Diversity is a dual receiver design that uses both receivers simultaneously and mixes their audio outputs in a ratio controlled by the incoming RF signal levels at the two receivers. A panning circuit begins to operate at a fairly high signal level and continues to operate until both receivers again have a fairly strong signal. This approach anticipates dropouts long before they occur, since the circuitry starts panning away from the receiver with a falling signal level long before any audible noise occurs. By the time the signal falls too low to be picked up, the circuitry has long since panned to the other receiver.

The first antenna phase switching diversity techniques used a single receiver and employed a simple algorithm that combined the output of two antennas, switching the polarity of one of them when the RF signal level entering the receiver dropped to a very low level. The polarity was switched and if the signal level then increased, the switch would remain in that position until the level dropped again and the switch would toggle again. The advantages of this design include the fact that two antennas gather more signal than one, which often increases operating range, and since there is only one receiver involved, the cost is lower. The shortcoming of this design is that the diversity activity does not take place until the signal is very close to the squelch threshold of the receiver. In addition, the audio gain on the transmitter has to be set high enough to achieve a high audio signal to noise ratio to bury audible clicks that the switching activity can produce.

SmartDiversity™ is an improvement on basic antenna phase switching by using a microprocessor controlled algorithm to determine optimum timing for the switching activity. The algorithm analyzes both the incoming RF level and the rate of change in RF level to determine the optimum timing for phase switching, and the optimum antenna phase. The system also employs “opportunistic switching” to analyze and then latch the phase in the best position during brief squelch activity. 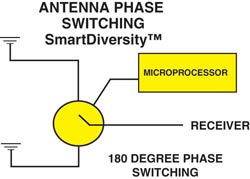 Rota-versity™ is only possible in the digital realm. This technique uses a four-way phase shifter to combine the output of two antennas in any of four phase angles, each 90 degrees apart, regardless of RF levels. Hundreds of times per second, all of the phase angles are explored, with the angle offering the best reception used for the audio data. The result is that the diversity system “tracks” the phase shift between the two antennas to ensure that they always add to one another (they are always less than 90 degrees out of phase). Multi-path dropouts are minimized and operating range is maximized by using both antennas simultaneously. Rota-versity™ is also transparent and cost effective because it times the phase switches to happen only during digital packet headers, where no audio is being conveyed 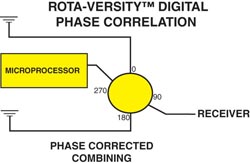 Frequency Diversity combines the techniques of SmartDiversity™ and OptiBlend™ ratio diversity with the additional redundancy of using two separate transmitters. The two transmitters, on different RF channels, are adjusted to deliver essentially identical audio at two SmartDiversity™-equipped receiver modules. The outputs of the receivers are then combined in an OptiBlend™ ratio, which automatically adapts in real time to RF signal strength. If Lectrosonics 400 Series or 200 Series transmitters are used, the OptiBlend™ ratio is also influenced by transmitter battery status, so a single failing battery will not glitch the audio.