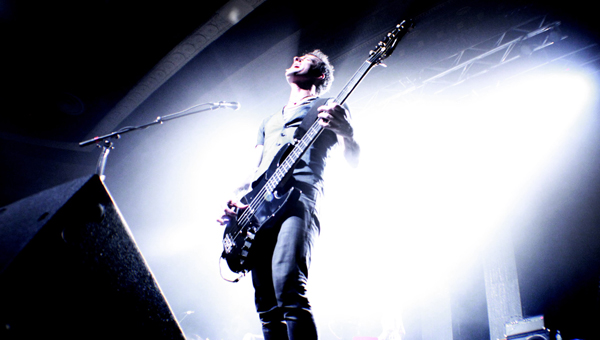 Toronto, Ontario, Canada – February 2014… Wireless microphones enable vocal performers to move about freely—increasing their ability to interact with the audience. So why not provide wireless connectivity to a band’s instrumentalists? Duncan Coutts, bassist for Our Lady Peace, the Canadian alternative rock/post-grunge band, wanted this capability and found it—with the IS400 wireless instrument system featuring Digital Hybrid Wireless® technology from Rio Rancho, NM-based Lectrosonics.

Toronto-based audio engineer Tim Murray serves as the lead technician for Our Lady Peace. He’s been with the band for over twelve years, which presently consists of lead vocalist Raine Maida, Jeremy Taggart on percussion, Duncan Coutts on bass, and Steve Mazur as lead guitarist. Our Lady Peace has sold millions of albums worldwide, won four Juno Awards, and won ten MuchMusic Video Awards — the most MMVAs ever awarded to any artist or group.

Several years back, Jamie Howieson, the band’s system engineer, turned Murray on to Lectrosonics wireless products and this is how he and, shortly afterwards, Duncan Coutts, discovered the IS400 wireless instrument system. “At this point, Duncan has actually been using the IS400 wireless system for a good ten years,” Murray reports. “His setup consists of the R400a receiver, which sits on his pedalboard, the LMa beltpack transmitter, and the Lectrosonics MI39ARA instrument cable, which feeds the output of his bass guitar to the LMa. We’re both really impressed with the performance of this equipment. Audio quality is very natural sounding and transparent. You really can’t tell that we’re using a wireless system because the instrument’s sound is an absolutely accurate representation of the bass. It’s as if Duncan were connected with a cable.”

Murray also reports that Lectrosonics manufacturing is first rate. “We’ve been very impressed with the rugged build quality of the Lectrosonics gear,” he says. “Not only does the system provide consistent, dropout-free performance, it’s built like a tank. These aspects of the gear inspire confidence in the product, so we never have to worry about signal strength or equipment failures. The system has been very impressive in this regard. In the ten years we’ve been using the IS400, we’ve performed in many cities around the world and we’ve only had to tune the unit perhaps twice.”

For any performing artist, quality customer and technical support services are a crucial concern. Here too, Murray reports a very positive Lectrosonics experience. “I’ve been very impressed with Lectrosonics’ support services,” Murray said. “Colin Bernard and Joe Burtinsky at the Toronto office have been just great to deal with. In all the years we’ve been using this gear, we’ve only had one issue and they took great care of us. The people at Lectrosonics exhibit 100% professionalism—the same as we’ve come to expect from our wireless equipment.”

Before turning his focus back to the band’s upcoming projects, Murray offered these parting thoughts, “After using wireless technology for many years, it’s very rare that you come across a wireless system that gives you all the tone and punch with rock solid, dropout-free signal flow, very little required maintenance, and little time spent tuning frequencies—no matter where in the world you may be!”

Duncan Coutts concurs with Murray’s assessment, “I have been using my Lectrosonics wireless system for more than a decade. It has never let me down. I will never use another wireless system. Lectrosonics is truly unparalleled. Tim and I couldn’t be happier with this gear.”