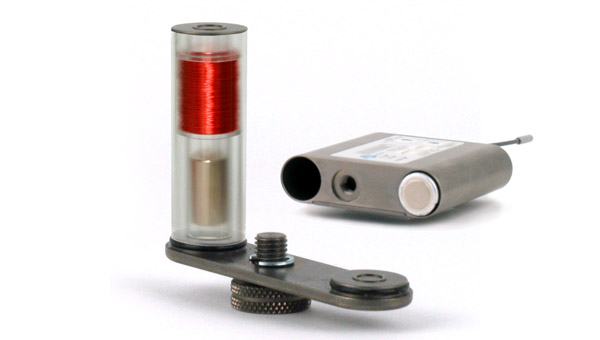 Rio Rancho, NM – April 1, 2012… Lectrosonics, recognized the world over as a leading manufacturer of wireless microphone systems and audio processing products, is pleased to announce the introduction of a new key accessory for the company’s highly regarded SM Series dual-battery transmitters: the SM-SHAQUE ("SM Shake"). This new accessory is installed in the SMDB or SMQV transmitters as a battery eliminator and incorporates a small generator that is operated simply by shaking the unit.

The SM-SHAQUE’s tiny generator uses a finely wound wire coil and a powerful Neodymium ‘rare earth’ magnet in order to take advantage of Faraday's principal of generating electric current by passing a moving magnet through a coil. The rarity and supply challenges of these magnet materials have already pushed back the originally planned delivery from October 1, 2011 to April 1, 2012.

The principal application for this accessory is sports broadcasting, since more and more, players are being required to wear wireless transmitters in order to capture play-by-play audio. Theater users are also likely to benefit from this new technology. However, any wireless microphone users that jump around excessively can benefit from use of the SM-SHAQUE.

The SM-SHAQUE only works with dual-battery Lectrosonics SM series transmitters since the batteries are in parallel and the SHAQUE unit charges the single NiMh battery in the remaining compartment directly. Competitor's units with dual-AA batteries in series will not work with this accessory. Transmitter RF transmission power settings of 250 mW are not recommended when using the SM-SHAQUE unless there is a whole lot of shaking going on.

According to Lectrosonics' president, Larry Fisher, “Battery life has always been a concern when it comes to wireless microphone transmitters. This is especially true in sports and theater where the transmitters must be buried within costumes or padding. Athletes and actors are also sometimes either inaccessible or touchy about having audio techs reaching under their clothing all the time to change batteries. The SM-SHAQUE solves all of that."