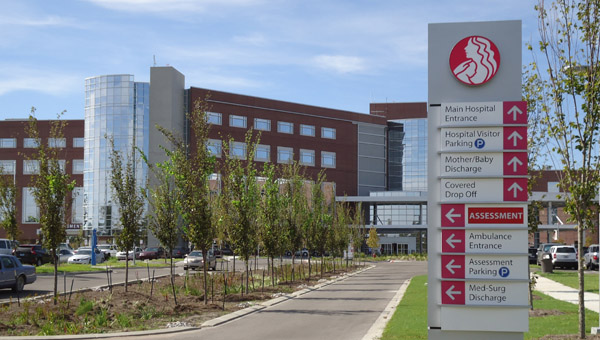 Baton Rouge, LA – December 2012… Specializing in the care of women and infants, Women’s Hospital is the premiere facility of its kind in the greater Baton Rouge area. With the recent completion of a new conference facility, the hospital now has state-of-the-art capability for handling presentations, training sessions, and related business. Audio and video provisions are crucial to a facility of this nature and, to ensure trouble-free sound, an ASPEN Series Digital Audio Processor from Rio Rancho, NM-based Lectrosonics was incorporated into the conference center’s AV equipment arsenal.

Technical Services Group, a design/build firm that provides a wide range of contracting services in commercial broadcast radio, television, audio, video, and control systems, including total engineering management, installation, design, maintenance, and service, was contracted to design and install the new facility’s AV system. Scott Richard, System Designer for Technical Services Group, discussed the challenges of the project and his decision to equip the facility with a Lectrosonics ASPEN SPN1624 digital audio processor.

“The new conference center is very versatile,” Richard reports. “The space consists of two primary areas: one that can be divided into two smaller rooms and another larger area that can be divided into three rooms. This type of versatility meant that the projector and the distributed system must have the ability to combine and un-combine—depending upon the area’s configuration at any given time. One of the big concerns for the hospital was managing these areas without the support of a full-time AV technician. With that said, unattended operation was key to the success of this project.”

“The area is set up to accommodate 15 wireless microphones, with upwards of three mics in any of the five possible spaces,” Richard continued. “In addition, the AV system manages the audio program material from a stationary desktop presentation computer that resides in the conference area or from ‘visiting’ laptop computers that the various presenters may wish to patch into the system. All of this is coordinated via a Crestron DigitalMedia™ digital AV control system that communicates with the ASPEN processor via RS-232. With a simple touch of the Crestron’s control panel, the ASPEN 1624’s automixing capabilities adjust the room’s audio provisions automatically—making the entire process transparent to the end user.”

When queried about those features that made the Lectrosonics ASPEN SPN1624 a good fit, Richard offered the following, “Unattended operation and the ability to interface with the Crestron were key attributes,” he said. “The ability of the ASPEN SPN1624 to re-configure itself—depending upon the way the rooms are set up—is incredibly useful, as it eliminates the necessity of an AV tech or anyone else having to interface with the equipment. I’ve also been extremely impressed with the ASPEN processor’s ADFE (Automatic Digital Feedback Elimination) function. Since the facility opened in late summer, we haven’t received a single call regarding feedback issues. It’s been terrific.”

Richard reports that Lectrosonics customer and technical support services were yet another important consideration in the deployment of this system. “I have a long history with Lectrosonics and am always impressed with the company’s support services, which I consider the best in the AV industry,” Richard notes. “If I have any questions or concerns, I know I can contact the company and get right to the nuts and bolts of the issue without wasting time.”

The deployment of the Lectrosonics ASPEN SPN1624 digital audio processor at Women’s Hospital was initially arranged through Technical Services Group’s Vice President of Sales and Marketing, Patrick Meek, who was instrumental in securing the project for the company. “The new conference facility at Women’s Hospital was a very important installation for our company,” says Meek. “This was a high visibility project, as the hospital provides a variety of unique services to the area. We are very proud to have been a part of this project. The AV system has now been operation for a few months and our client is very pleased. The Lectrosonics ASPEN processor is an integral part of that system and the SPN1624’s contribution to its overall performance is considerable.”