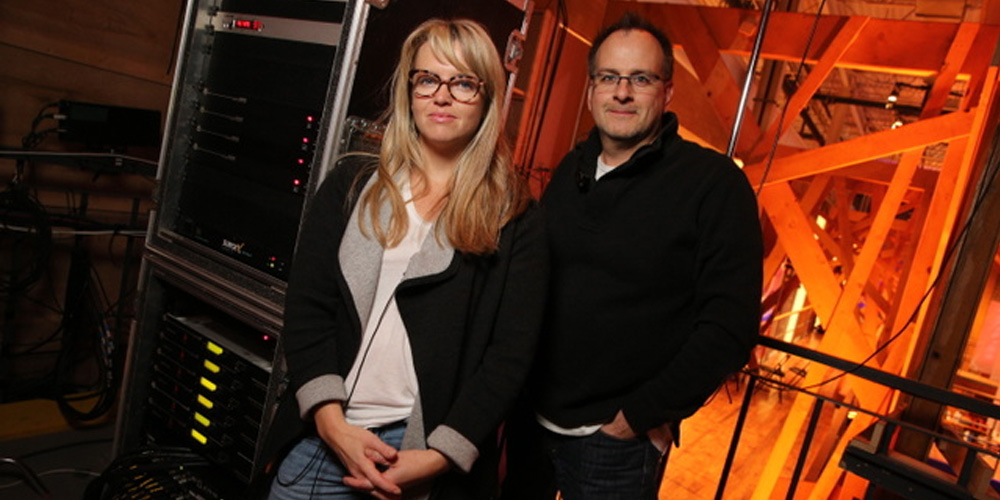 “Lectrosonics’ products are well built and they’ve been reliable—and in this industry, reliability is everything. When you’re shooting in the field you can’t have any excuses. You get one kick at the can and it has to be right. And Lectrosonics has always been there for us.”

Toronto, Canada (February 25, 2016) —When the third season of the amateur culinary competition series MasterChef Canada airs on CTV beginning on Sunday, February 14, all of the dialog will have been captured using Lectrosonics Digital Hybrid Wireless transmitters, receivers and antenna systems. The show’s audio director, Jan McCharles, and technical director, Brent Marchenski, are employing a total of 64 channels of Venue receivers and 16 channels of UCR411a compact receivers together with dozens of SMQV belt pack transmitters on the 15-episode series, which is the Canadian version of the Gordon Ramsey reality TV hit.

“Every single person that is on-camera is recorded with Lectrosonics,” says McCharles, who mixes in the studio through a Yamaha CL3 digital desk to Mac-based Metacorder software with a Sound Devices 970 for backup. This season, the competition begins with 40 home chef audition winners who are initially whittled down to 14 finalists before facing the challenges set by the show’s three judges, Canadian restauranteurs Claudio Aprile, Michael Bonacini and Alvin Leung.

McCharles and Marchenski, who have been working together for nearly a decade, mainly in reality television, own a combined total of approximately 50 SMQV transmitters, one-dozen six-channel Venue receivers loaded with VRT modules and one-dozen UMC16B antenna multi-coupler units. "On MasterChef Canada," says Marchenski, “We have 32 VRT channels and an eight-channel antenna system in the studio. Jan has a similar set-up in the field that she has in the studio. The production cart has a Yamaha CL1 and 32 channels of VRT, and we have 16 UCR411a receivers split between two ENG-style rigs and a four-channel antenna system in the field.”

McCharles reports that the operational life of the SMQV dual-battery transmitters is important on this show. “It’s a not a scripted show with scheduled breaks. We shoot until we’re finished. So we need at least six hours of operation time, seven hours max,” she says.

The award winning sound team of Marchenski and McCharles has worked together in various roles on shows including Canada's Next Top Model, Canada's Greatest Know It All and Canada's Worst Driver, which is going into its twelfth season.
“We’re very heavily invested in Lectrosonics products,” comments Marchenski, noting that he and McCharles initially adopted Lectrosonics UM series UHF transmitters and Quadpack receivers and have continued to grow with the line. “Lectrosonics’ products are well built and they’ve been reliable—and in this industry, reliability is everything. When you’re shooting in the field you can’t have any excuses. You get one kick at the can and it has to be right. And Lectrosonics has always been there for us.”

“We have put the SMQVs through some serious testing, through some of the most rugged situations, with body sweat, dirt, rain and water. They’re rock-solid. They work for us and we know them inside-out, as do all the people that work with us," reports McCharles. “And we have a team of people that are excellent at wiring and masters at their trade. We wouldn’t succeed without the people that we hire for these shows.”

She continues, “We never want to see packs or microphones on people. We’ve taken a lot of care and developed a system of miking to ensure that it looks great on-camera and gets a clean sound as well. The preparation that goes in before we even start is probably why we’ve been successful. We put a lot of work into the organization and the coordination before we even step out the door. We would never leave the building unless we knew for sure that the system was going to work at the location where we’re shooting.”

“Lectrosonics has really listened to the mixers and the field operators. They have always been there; if you ever have a question you can phone them, and they’re receptive. Their service has always been second to none,” comments Marchenski. “And having an office in Toronto was probably the smartest move that Lectrosonics could have ever made. I can’t emphasize enough how important it is for us to have the support of Joe [Burtinsky, RF Technician and Technical Support Specialist] and Colin [Bernard, Director of Canadian Operations]. It just makes Lectrosonics such an obvious choice for us.”