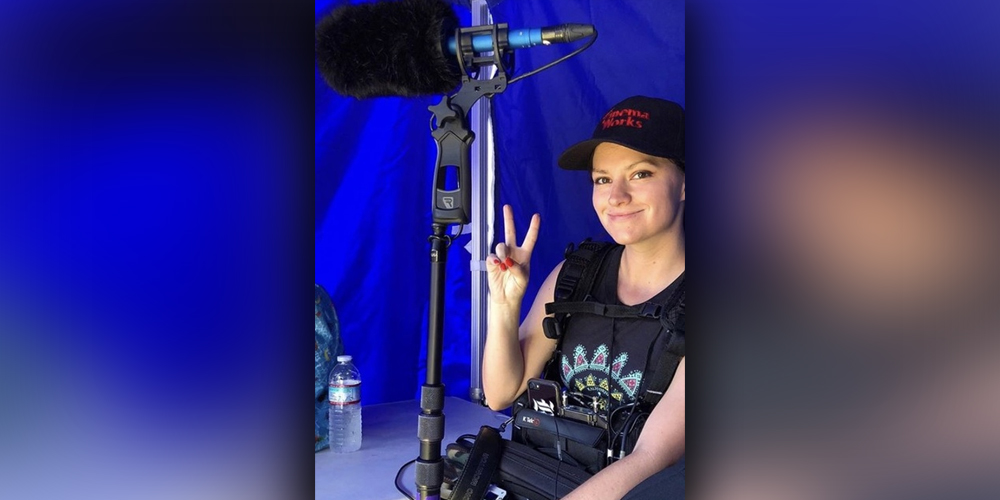 “You can drive a truck over it and still use it.”

Rio Rancho, NM (July 9, 2019) — Production sound recordist Kally Williams’ story is the kind that draws everyone from aspiring actors to gaffers towards Los Angeles with celluloid dreams: Work hard, perfect your trade, and the dream can come true. Her mixing credits range from the YouTube show “Hello Hunnay with Jeannie Mai” to the Netflix horror anthology to a recent KFC commercial. She now enjoys a coveted spot on the first call list when films, TV series, and documentaries of all kinds need expert sound mixing on location under any conditions. Always by her side is her Lectrosonics Digital Hybrid Wireless® gear, including SRC dual-channel slot-mount receivers paired with the compact SMQV and micro-sized SSM belt-pack transmitters.

“A lot of production sound people come into it from music, but I always wanted to be a filmmaker,” recalls Williams. “My twin sister and I were always making YouTube videos even in high school, and at age 20 we moved from South Carolina to L.A. Of course, I wanted to direct, and started volunteering on projects. Instead of just being a production assistant, I found myself very drawn to the audio department because everyone’s passion for their gear is so strong in the L.A. community. When I first got the chance to work with experienced mixers, they were all using Lectrosonics wireless gear.”

Having used another wireless brand in her formative years which “didn’t compare to Lectrosonics at all,” Williams says it was a personal touch that eventually helped her go Lectro. “When I finally had enough money to buy something really pro for my own rig, I happened to meet the Lectrosonics folks at an NAB [National Association of Broadcasters] convention, and they were such a supportive, knowledgeable, and downright nice bunch of people! Plus, since they make everything here in the USA, I felt that in the event anything ever went wrong, it would be easy to get repaired.”

Location recording often means dirt, dust, extremes of temperature, and sometimes, hazards from the production effects themselves. Williams recalls many incidents where her Lectrosonics gear took a pounding and kept on sounding, but one in particular stands out. “It was a horror shoot, and we had SMQV on the talent,” she recalls. “There was a scene where fake blood was supposed to explode all over the place—and it did. The SMQV came back to me just soaked in the stuff, like it had been pulled from inside a body or maybe was bleeding itself. I thought it was toast, but after cleaning it off with rubbing alcohol, it kept working fine and does to this day. I’m really impressed with how tight and well-sealed the SMQV is in particular. You can drive a truck over it and still use it.”

In production-dense L.A., the airwaves can be as full of pitfalls as the set—unless you’re using Lectrosonics, as Williams points out. “The SmartTune feature really works out for me, and I really like the wideband of all my receivers. So many crews are using the same blocks of frequencies, and there are a lot of us! But there’s always something in the three blocks available on the SRCs that they’ll lock onto. On the rare occasion where I might get unwanted signal on a channel because of this crowded spectrum, I just rescan and the SmartTune will pick up a clear frequency.”

Of late, the SSM, which is the most compact transmitter Lectrosonics offers, has become a go-to for Williams. “You can hide that on anyone, no matter how petite, and not ever see it in the shot,” she praises. “I used them recently on a documentary where they only had one camera. They’re going from wide to close-up and back again and constantly reconfiguring. That’s not a friendly situation for a boom mic. So, we put SSMs on the talent. I think it’s also important that the SSM is so light the talent forgets it’s there. It doesn’t distract them from their performance, which potentially means fewer takes. When I first show the SSM to actors, they think it’s the coolest thing ever!”

Asked what she’d recommend to aspiring filmmakers ready to up their audio game, Williams advises, “If you have to get just one receiver, get the SRC. You get two channels, they mount in standard slots for camera rigs and audio bags, and I think they might be the best value in Lectro’s product line. For transmitters, again, I’m loving the SSM because it has great range and sound quality and it just disappears. Unless you want to make horror movies. Then, get the SMQV!”