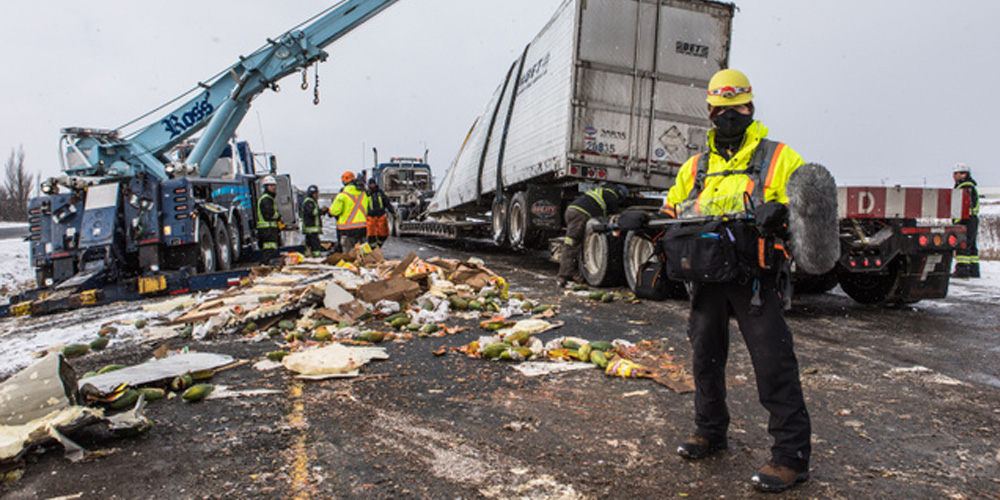 Toronto, Ontario, Canada (March 15, 2017) —The highways fanning out from Toronto and route-numbered in the 400s are some of the most vital in North America to commercial and commuter transport alike, with route 401 through the city proper claiming the dubious honor of busiest stretch of highway in the world. Add Canadian winters and Lake Ontario-borne storms, and accidents will happen. When they do, police and the Ministry of Transport work with multiple towing and recovery experts to clear the roads and ensure people's safety. Heavy Rescue 401 chronicles their challenges on cable's Discovery Canada channel, and production sound recordist Peter Hamilton relies on Lectrosonics' new PDR portable digital audio recorder to bring viewers into the driver's seat.

"We use multiple PDR recorder units for a specific application," Hamilton explains. "They capture the CB radio and walkie-talkie chatter between truck drivers and rescue operators. We install one in the cab, or on the portable radio, of various drivers and workers involved in the show, which saves us a huge amount of resources as we don't have to tie up a multi-track field recorder for the same task."

While the term "CB radio" evokes the 1970s consumer craze that saw suburbanites greeting each other with phrases like "Ten-four, good buddy" on their way to the grocery store, rest assured that the technology still has real-world applications such as pulling 18-wheelers out of impossible ditches and snowbanks — you don't want to be worrying about your cell phone signal for the associated point-to-point communications. "The gain range of the PDR has proven to be a perfect match for the varying 'line-level' outs of today's CB gear," says Hamilton. "We have never had a problem with the levels of recorded audio."

The PDR records mono or dual-mono audio via a standard TA-5M input onto MicroSD cards at the broadcast-standard resolution of 24 bits and 48kHz, and has the same rugged aluminum construction and compact form factor as Lectrosonics' wireless audio transmitters and receivers. "We install them at the beginning of each shift, and sometimes they can run for up to 24 hours straight," says Hamilton. "We can catch conversations of any trucker who's running by an accident. And since they all jam-sync to SMPTE time code, we can collect them at the end of the day to assemble the sound clips for post-production, and everything is on the same page."

Hamilton and the production crew of Heavy Rescue 401 are no strangers to Lectrosonics equipment. "I've been using Lectrosonics throughout my 20-year career," beams Hamilton, "and virtually all of our wireless on this show is 'Lectro,' whether it's transmitters or receivers piggybacked on cameras, whatever. So I'm a big Lectro fan."

Though Lectrosonics is chiefly known for wireless audio, the PDR is not itself a wireless device, and Hamilton considers this a benefit: "The issues of RF spectrums are starting to weigh on everybody, and we are always worrying about room to work," he says. "As the PDR is a local device that we can embed in any situation, we don't have to worry about what further bands of spectrum we may be tying up."

And, according to Hamilton, the audio quality has been great, even though in this case the folks using the PDR are preoccupied with an actual recovery situation. "The only potential downside to working this way is that it's 'set it and forget it'.' We can't monitor in real time, and have to hope for the best," says Hamilton. "So far, though, we haven't had a single issue. Virtually all of the sound clips recorded have been crystal-clear when putting the show together."