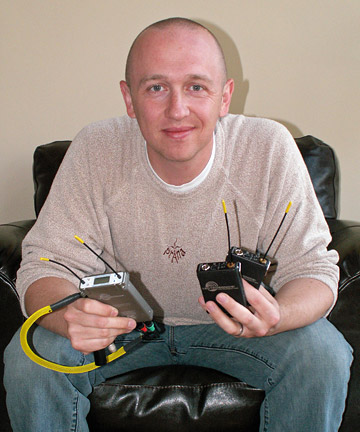 Prévost, Quebec, Canada… Capturing the crazy things kids do can be a daunting task for TV and film production crews, and this was very much the case recently with Les pieds dans la marge, a French language comedy show for teenagers in the 14 to 17-year-old range that airs on Canada’s CBC broadcast system. With the action, so to speak, taking place entirely in an Olympic-size pool, capturing location sound required the expertise of Pascal Van Strydonck and his Lectrosonics wireless equipment.

Audio designer and consultant Van Strydonck, who over the past twenty years has worked in the areas of location sound, theatrical sound design, and systems design, has been involved in just about every type of project imaginable, including Cirque Du Soleil’s “O” at the Bellagio in Las Vegas as well as Franco Dragone’s “Le Reve” at the Wynn Las Vegas. As a location sound engineer, his talents are equally in demand and, presently, his skills are being put to good use on Les pieds dans la marge.

“Les pieds dans la marge is a mix of sketches, reporting, parodies of TV shows, false advertisements, and bizarre television of all sorts,” notes Van Strydonck. Guided by the quirky talent of Mathieu Pichette, Félix Tanguay, and Jean-Sébastien Busque, the series takes risks, aims to shock, and breaks out in all directions. For a recent show, the contestants had to, or at least try to, remain afloat for twelve hours. Everything that happened on this shoot occurred in the water. This required capturing the sound with boom mics from all areas of the pool. Since the cameraman needed the freedom to move around without wires getting in the way, all sound had to be wireless.”

In addition to requiring a wireless camera hop, Martin Rioux, the show’s Director of Photography (DOP), was very concerned about the weight that a wireless receiver would add to the camera during this long session. “Nobody wants to carry a camera for twelve hours,” laughs Van Strydonck, “and the prospect of shouldering the additional weight of a camera mounted audio receiver made this task even more challenging. For this very reason, I knew that Lectrosonics’ new SR Dual-Channel Slot Mount ENG receiver was the perfect piece for this project. It’s small, lightweight, and delivers extremely high quality sound.”

Van Strydonck mounted the SR receiver onto the camera using a tiny pouch and a wiring harness, with power for the receiver supplied by the camera. The entire project was miked via a boom using two Lectrosonics LMa Digital Hybrid™ UHF belt pack transmitters. “When I brought the receiver to the job,” said Van Strydonck,” the DOP discovered that the cables to connect it were actually heavier than the unit itself. He was positively thrilled.”

“The sound quality of this system is terrific,” continued Van Strydonck. “This setup enabled me to boom from the 3 meter diving board so as to get deeper into various areas of the pool without being tied to the camera. Even with a distance of as much as 100 feet away, the system’s performance was flawless. Not once did I experience any dropout.”

When queried about those qualities of the Lectrosonics system that were most important on this project, Van Strydonck offered the following assessment. “The SR receiver and the LMa transmitters deliver impeccable sound quality,” said Van Strydonck. “Further, the gear is really easy to learn and its operation is intuitive. It’s very reassuring to know that I can strap the receiver to a camera, switch it on, check my frequency, and know it’s all going to work without fail. I’ve used quite a bit of Lectrosonics gear over the years and every piece is tough and built like a tank.” Van Strydonck reports that his SR receiver and LMa transmitters were a big hit with the entire production crew. “Everyone involved in this project was delighted with both the sound quality and the light weight of the system,” Van Strydonck said. “I’ve since been called back to do more work on this show. For me, that says it all!”

About the Lectrosonics SR Dual-Channel Slot Mount ENG Receiver
The SR receiver offers two independent channels and fits into the standard video camera slots found on professional cameras. The two audio channels can feed separate inputs or can be mixed internally to feed a single input. Two diversity modes are offered in the SR. SmartDiversity™ reception is employed by independently combining antenna phase for each receiver channel. Alternately, the two channels can be used together in “True Diversity” Ratio mode as a single receiver. Graphic spectrum scanning provides quick and easy location of clear operating frequencies for interference-free operation.