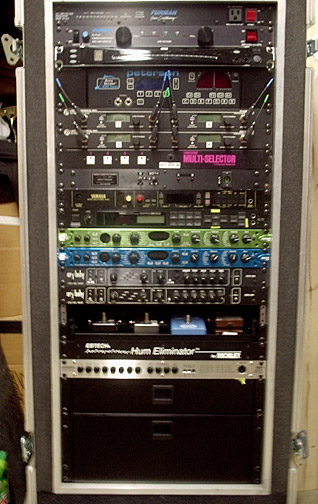 Rio Rancho, NM – NAMM Booth #1206, Hall E… When Slash was gearing up for the current Velvet Revolver worldwide tour, a new touring guitar rig was required to match the effects and sounds created in the studio for the latest record. According to Adam Day, Slash’s guitar tech, “A clean, convenient, sonically transparent switching system was now needed more than ever. One of the most (if not the most) important components considered was the wireless system. When a well respected pro guitarist referred us to the Lectrosonics, we decided to give it a serious listen along with two or three other top wireless systems.”

Slash and Day set up extensive tests to decide which system they would take on tour, based primarily on sound quality. Day describes the outcome, “The Lectrosonics IS400 system was ultimately selected hands down by both Slash and me for its sonic clarity. The clincher for Slash was how it reacted with acoustic instruments—no companding, just clean, pure sound.” Day also describes the user interface, “The system's receiver menu couldn't be more user-friendly. With the Smart Tune feature, I'm able to easily find the four open frequencies we require in any given city.”

The Lectrosonics system chosen by Day and Slash includes four R400a receivers in dual rack-mount configuration. Each one of Slash’s 14 guitars is set up with a 50mW IM transmitter and MI33ARA JFET instrument interface cable. Day fashioned a small pouch for each transmitter to integrate with Slash’s thin black leather guitar straps.

But as Day points out, the real testament to the Lectrosonics wireless has been the result of taking it on the road. As a high energy performer, Slash constantly puts all his gear through the wringer and the wireless is no exception. According to Day, tours throughout North America, Europe and Australia have so far proven the famous Lectrosonics reliability, “The Lectrosonics has performed well beyond my expectations on the road. With its durability and high powered transmitters, wireless performance is now something I never have to worry about. While recently touring North America for six weeks, Slash was the only musician on stage (including three other members of V.R. and three in the support act) using a wireless system that did not experience one single wireless-related problem the whole time!”