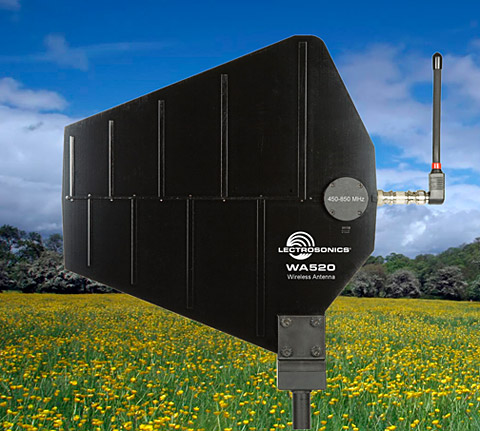 Rio Rancho, NM – April 1, 2008… Lectrosonics, recognized the world over as a leading manufacturer of wireless microphone systems and audio processing products, has introduced the WA520 Wireless Antenna, the latest in a long line of highly innovative “thinking outside the box” products such as the XSDT, the Heritage Series transmitters, and the Battery Banshee. The WA520 Wireless Antenna covers the entire UHF range between 450 and 850 MHz and consists of a directional component (Log Periodic Dipole Array, or LPDA for short) and an omni-directional whip element for re-transmission to the receiver. The two components are coupled via a 50-Ohm matching circuit.

The WA520 operates by providing up to 7 dB of isotropic gain via the LPDA in the forward direction in order to overcome the inherent loss incurred by re-transmission via the whip component. The resulting RF field signal strength is +0 dBi or unity gain. Thus, the operating range of the WA520 is dependent on placement and the original RF field strength. Consistently good results have been obtained with distances up to 300 feet (90 meters) between the transmitter and the WA520 and then up to 20 feet (7 meters) between the WA520 and the receiver.

Mounting and placement of the WA520 is very simple, since no antenna cables or power sources are required. It is critical, however, that the receiver whip antenna and the re-radiator antenna not be placed directly above the other due to the antenna null directly above and below the vertical axis of the two antennas. The mounting block on the WA520 can accept several threaded stud sizes, including 1/4”-20 (tripod mount), 3/8”-16 (pro tripod mount) and 5/8”-27 (mic stand).

Karl Winkler, director of business development at Lectrosonics, commented on the Wireless Antenna, “This is one of those products that had us saying 'why didn't we think of this before?' As it turned out, we had, indeed, thought of it before many times but rejected the idea outright. This time around, it finally made sense for some reason. The elimination of the antenna cable between the remote antenna and the receiver is another step forward in making wireless systems truly wireless.”