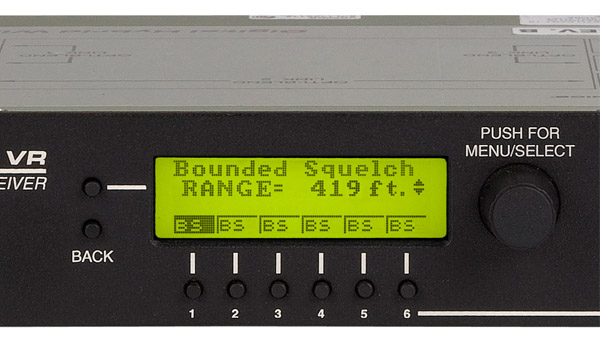 Rio Rancho, NM – April 1, 2011… Lectrosonics, recognized the world over as a leading manufacturer of wireless microphone systems and audio processing products, is introducing a new feature for their Digital Hybrid Wireless receivers that precisely limits the range of the system without altering transmitter power. The new Bounded Squelch feature is in response to users concerned about leakage of wireless microphone transmissions when several facilities are in close proximity, such as theaters in downtown areas or adjacent TV studios. The traditional method of limiting range by using very low transmitter power is demonstrably a poor solution and has become less and less effective due to rising RF noise floors in urban areas. Furthermore, the continuing deployment of white spaces devices will cause increasing problems with low power transmissions.

Bounded Squelch solves the cross interference of close installations by measuring the precise latency (delay) between transmitter and receiver, cross-referenced to the specific transmitter frequency chosen. Since RF transmissions operate at virtually the speed of light, this latency can be precisely calculated. For instance, if the user wants a maximum range of 419 ft on a particular channel, the system will receive the desired frequency on that channel, as long as it has approximately 425.998708 nanoseconds or lower latency from the transmitter since radio waves propagate at 1.01670336 nanoseconds per foot.

Larry Fisher, President of Lectrosonics, said, “This breakthrough should have a major impact on the theatre market. Now, two stages that are 500 feet apart can each set the Bounded Squelch on their receivers for 250 feet, allowing plenty of range for each stage and completely eliminating pesky cross interference.” He noted that users should make sure to use the correct Nominal Velocity of Propagation for their antenna cables to remove the added delay of the cables. For instance, a 50 foot length of Belden 9913 with a NVOP constant of 84% would add an additional delay equivalent to 59.524 feet. This must added to the desired distance value at the receiver.

A secondary benefit of Bounded Squelch involves the automatic removal of RF reflections, since multiple reflections have a longer path length. Thus, diversity may no longer be needed for dropout-free reception, reducing system cost.

Firmware version 4.01.11 will be available for download from the Lectrosonics web site. Included in the firmware update package is an iPhone app that includes a map of all known theaters, churches, civic venues, TV studios, and film sets, and the exact distances between them. Users can call up a specific location by zip code and have access to the data needed to set up their Bounded Squelch (B.S.) receivers.