Lectrosonics Wireless Behind The Scenes with "Beverly Hills Nannies" 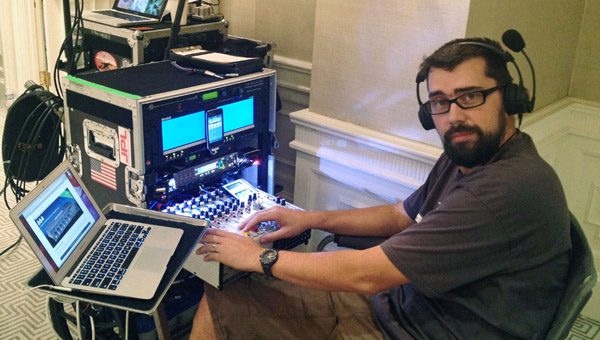 Los Angeles, CA – October 2012… On September 4th 2012, ABC Family Television (in conjunction with Evolution Media) aired Beverly Hills Nannies: Nannies Tell All, a reunion of the popular reality show that focuses on a group of young nannies working for the higher-class wealthy in the world's most unreal neighborhood. Keeping up with the action meant having a substantial number of wireless microphone systems that offered the sound quality, flexibility, and dropout free performance necessary to capture it all. That’s precisely why LA-based Production Sound Mixer Scott Jason Farr, CAS, relied on an assortment of transmitters and receivers from Rio Rancho, NM-based Lectrosonics.

Farr discussed the challenges of the project, “This show required a minimum of 18 systems—16 body mics, 2 handhelds, and backups. The vendor, Bexel ASG (Audio Specialties Group) and Audio consultant Jess Contreras really came through on this job. It was very important that we have the flexibility to go from the backstage dressing rooms to the on stage area and have the mics work with both the main stage system and the ENG crews following all the ‘behind the scenes’ action with two roving reporters for the show’s website. In addition to production-grade audio quality, this required dropout-free performance and the RF agility necessary to make quick frequency adjustments, should we find ourselves competing for open frequencies. The Lectrosonics gear excelled on all counts.”

In addition to the equipment Farr supplements for various projects, he owns 12 Lectrosonics MM400c beltpack transmitters, an HM plug-on transmitter for wireless boom, a T4 and UM400a IFB transmitter with two R1a IFB beltpack receivers for boom operator feeds, eight UCR411a compact receivers for his sound bag, two SRa dual slot ENG receivers with two UM400a transmitters for wireless feeds to ENG cameras, a D4 4-channel wireless system for wireless console feeds, and a Venue system fully stocked with VRT receiver modules along with three SNA600’s and an ALP620 for his cart. With all this gear and the nature of his work, quality customer and technical support services are essential. In this regard, Farr knows he can always count on Lectrosonics.

“I recently had all of my Lectrosonics equipment serviced including upgrading the hardware and firmware to match the current shipping versions,” Farr reports. “Some of my UCR411a’s are almost nine years old. Lectrosonics continues to provide support and develop firmware which includes new features. That’s pretty amazing considering other brands typically drop support after a few years—all of which reinforces my brand loyalty. My Lectrosonics gear does all my heavy lifting because I know I can always count on it.”

Before turning his attention back to preparation for an upcoming project, Farr offered these parting thoughts, “I’ve been using Lectrosonics equipment since roughly 1997 when I started with four UCR210D diversity receivers in a Quadbox and four UM250 transmitters. The systems performed flawlessly although I started replacing them in March of 2004 with the UCR411a’s. I think the UCR210D was one of the best receivers ever made. I get lots of positive feedback from my clients and crew for providing great sound recordings in difficult conditions. It is such a rarity for anything to go wrong that, if it does, it’s normally something completely out of my control. It’s this type of performance and reliability that keeps me firmly in the Lectrosonics camp.”

To learn more about Scott Farr, visit him online at www.farroutsound.com.